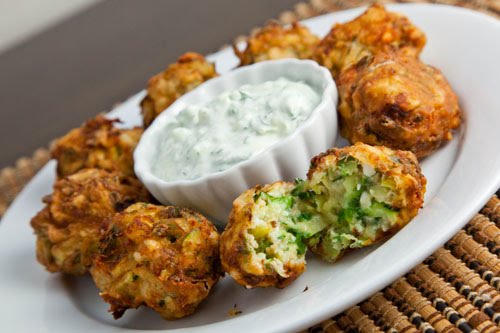 Zucchini, feta and plenty of fresh herbs rolled into balls and fried until light and crispy and golden brown! These zucchini balls are a great appetizer and can be served with tzatziki or marina sauce for dipping.

When I went to Greece on vacation last year, at one of the restaurants we went to we decided to skip having a main course and we ordered a bunch of mezes or appetizers to share. Among the appetizers were of course some of the classics including tzatziki (a Greek cucumber salad), melitzanosalata (a Greek roasted eggplant salad) and a few others. The one that really caught my attention however was the zucchini balls otherwise know as kolokythokeftedes. They were like meatballs only made with zucchini along with some herbs and feta. They were perfectly round, golden brown, slightly crispy on the outside and warm, soft, moist and tasty on the inside. The zucchini balls were so good and luckily I got to have a lot of them as many at the table passed on them when they heard that they were made with zucchini.
I had been meaning to try making the kolokithokeftedes at home for a while and now that zucchini season is running out it was time to get to making them. I pretty much just started with the recipe that I used for my Greek style zucchini fritters and modified it slightly for the zucchini balls. Where the zucchini fritters could be fairly liquidy and even be poured into the pan to fry the zucchini balls needed to be able to hold their form so I kept adding equal parts whole wheat flour and whole wheat bread crumbs until the mixture could hold the form of a ball. I also added a splash of ouzo to the batter to add a hint of anise that would add that something special that you just can’t quite put your finger on. Despite the fact that my skills at forming perfect balls falls a bit short, the zucchini balls tasted great! I served them with some tzatziki to dip them in and they made a really nice snack. They would also make for a nice light meal. It is always fun trying to recreate dishes that you remember fondly from another time!

Zucchini, feta and plenty of fresh herbs rolled into balls and fried until light and crispy and golden brown! These zucchini balls are a great appetizer and can be served with tzatziki or marina sauce for dipping.