Next week is Mardi Gras and even though I will not be in New Orleans to celebrate, I take it as an excuse to whip up some NOLA inspired dishes since I am a big fan on NOLA cuisine. Another one of my favourite dishes that I had when I visited New Orleans was the BBQ shrimp and I just had to try making it at home. Normally the BBQ shrimp is served whole with the shell and the head on but if you have any squeamish eaters feel free to serve the shrimp completely peeled. Other than the shrimp the the most important thing is the BBQ sauce which is a mixture of hot sauce, Worcestershire sauce, lemon juice, garlic and plenty of butter. The recipe itself is really easy, you just cook the garlic a bit in some butter, add the rest of the ingredients and simmer until the shrimp is cooked. Despite being so simple this New Orleans stye BBQ shrimp is so addictively good that you’ll want to serve it with some crusty bread to mop up absolutely all of the BBQ sauce. If you are looking for a way to celebrate Mardi Gras from home next week this BBQ shrimp is a great way to do it. (To be completely honest with you, I didn’t wait for Mardi Gras to enjoy this BBQ shrimp since it’s great any day of the year, including say, today!) 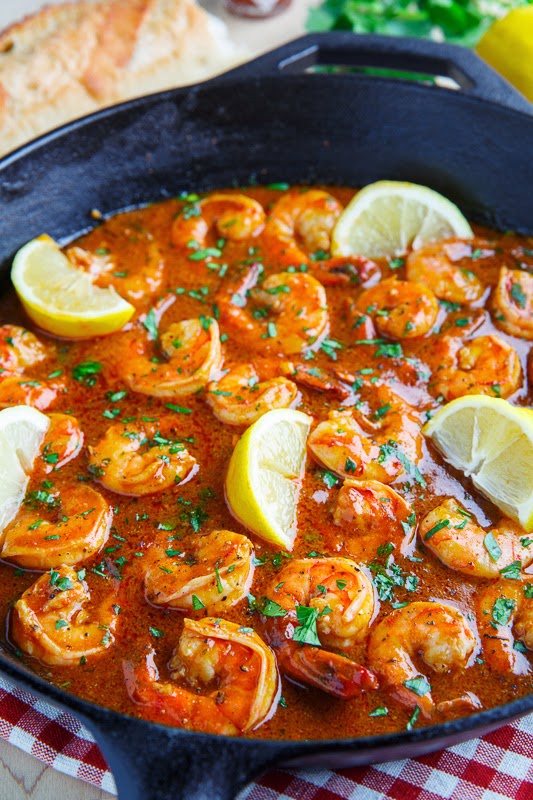 Serve with extra lemon wedges and crusty bread to soak/mop up all of the BBQ sauce!

It can be a bit messy but it’s finger licking good! Don’t let any of that sauce die a horrible death in the dish washer, please lick your plate clean! 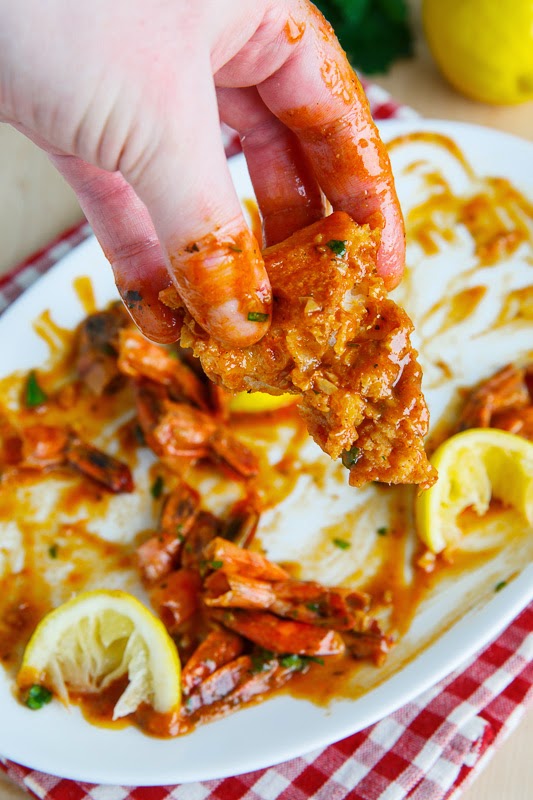 Note: * Normally the shrimp would be served in the shells with the heads still on but if you have some squeamish eaters, just remove the shells and make things easier at the dinner table.
Note: Different hot sauces have different levels of heat and everyone has a different tolerance to heat so add the hot sauce a little at a time until you get it to the level of heat that you desire. (I tend use Franks Red Ho hot sauce.)
Note: Different creole seasonings have different amounts of salt and some have quite a bit so go easy on it, adding a bit at a time to get the sauce to a nice level. (I tend use homemade creole seasoning to have more control over the salt content.)
Option: Instead of simmering to reduce the sauce by half to thicken it, you could add corn starch mixed into cold water to thicken it and save some time.
Option: Garnish with sliced green onions or chopped parsley to taste.
Nutrition Facts: Calories 487, Fat 23g (Saturated 14g, Trans 0.5g), Cholesterol 489mg, Sodium 1329mg, Carbs 12g (Fiber 0.5g, Sugars 4g), Protein 55g
Nutrition by: