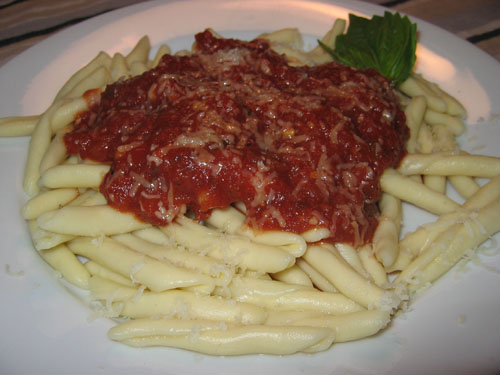 I saw an interestingly shaped pasta at the grocery store and I of course just had to pick it up. It is called “maccheroni calabrese” and it looks like little hand rolled cigars. It has been a while since I last made arrabiata sauce and I thought that it would go nicely on the maccheroni calabrese. Arrabiata is a quick, simple and tasty tomato and hot pepper sauce.
I eat pasta fairly often and I normally have parmigiano reggiano and pecorino romano in my fridge. My recipe for arrabiata sauce calls for pecorino romano but I was out. I went to the market and the cheese shop was also out! I had almost lost hope but the store clerk said they did have pecorino crotonese. I had never heard of pecorino crotonese but it had pecorino in the name and I like most cheeses. So I walked home with some pecorino crotonese.
It turns out that pecorino means that it is made from sheep’s milk and the romano or crotonese indicates the region of Italy where the cheese was made. The pecorino crotonese tastes great. I will have to pick up some pecorino romano and do a side by side comparison with the pecorino crotonese.

Similar Recipes:
Roasted Red Pepper Sauce
Take a look at the Presto Pasta Nights roundup at Once Upon a Feast.