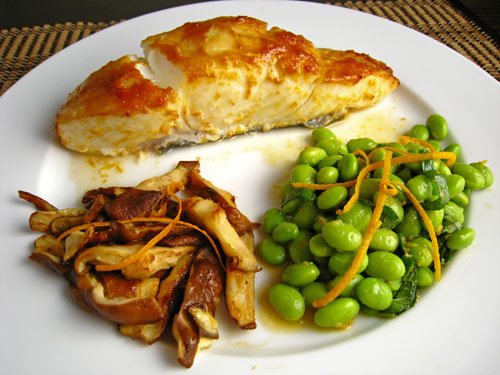 A while ago I came across a recipe for broiled salmon with orange and miso glaze that sounded pretty tasty. The dish also fit in with my desire to try to include more fish in my diet. When I got to the fish monger the area around the salmon was a bit busy and I noticed some halibut. In addition to wanting to eat more fish I have been wanting to try different types of fish, though I often get side tracked by the salmon. I could not remember ever having halibut before so I ended up grabbing some even though it was a bit pricey. This broiled halibut with orange and miso glaze was super quick and easy to make. Just mix the orange and miso glaze and broil. I am rather glad that I ended up with the halibut as it was really nice. Halibut is a meatier fish like salmon though not as fatty. It was nice and moist and tender and easily came apart with a fork. The glaze was pretty tasty. The citrus orange went nicely salty miso and the sweet mirin. Using the orange and miso sauce as a glaze was nice and quick though next time, if I have more time, I think I might try marinating the fish in the sauce for a while.
I went with the orange theme for the rest of the meal as well. I had an simple edamame salad with an orange and sesame dressing and some chopped mint. The dressing included orange juice, orange zest, soy, mirin, rice wine vinegar and sesame oil. I also had some shiitake mushrooms sauteed in sesame oil and finished with a splash of orange juice and some zest. Overall it was a light and tasty meal. Miso is is a fermented soybean product from Japan. It is most commonly used in miso soup but it has many applications in Japanese cuisine. You should be able to find miso in the Asian section of your local grocery store or at your local Asian grocery store. Mirin is a Japanese sweet sake that is commonly used in Japanese cuisine. It comes both with and without alcohol. You should be able to find mirin in the Asian section of your local grocery store or at your local Asian grocery store.