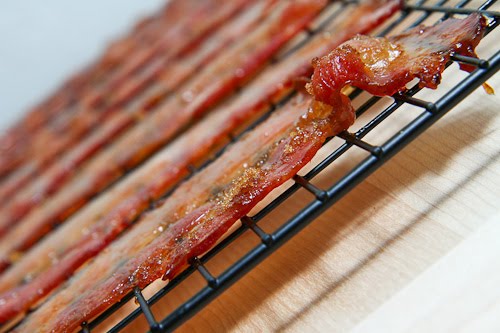 I have been wanting to try making candied bacon ever since I first came across the idea a long while ago. Candied bacon is essentially bacon that is coated in brown sugar and then baked until the brown sugar has melted, wrapping the salty bacon in its sweet embrace. Of course I immediatly thought of trying a maple version and I knew that both versions would be great. When I was in scouts when I was a kid, we always used to make pancakes with bacon at least once every time we went camping. When you’ve got a plate full of pancakes all covered in maple syrup it’s kind of hard to keep the bacon from getting syrup on it and the combo is really good! That got us to thinking and the next time we made pancakes with bacon we sped things up a bit by adding the maple syrup to the pan while the bacon was frying and the results were so good! It’s hard to go wrong with salty bacon covered in sweet, slightly caramelized maple syrup!
When the bacon is the star of the show like in this candied bacon, it’s time to get the good stuff, a nice thick cut of bacon fresh from the butcher rather than the shrink wrapped grocery store variety. Since I could not decide whether to go with the brown sugar version or the maple syrup version I just decided to go with both and I made half with each. The candied bacon was super easy to make and the results were nothing short of amazing! The crispy and salty bacon went so well all covered in the caramelized sweetness! I am looking forward to making this again and again! I was thinking that you could also experiment with adding other flavours such mixing some mustard in with the maple syrup.