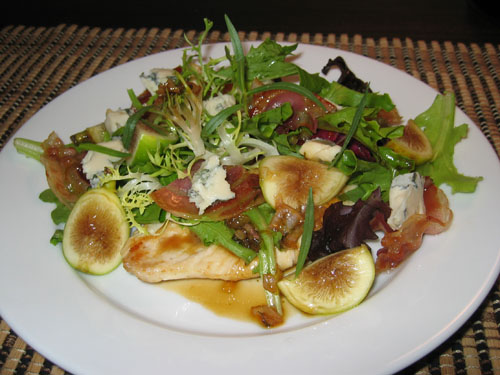 This months cooking club recipe at the Food for Thought blog at foodtv.ca is “Chicken Paillard with Fresh Fig Salad“. I am glad that this recipe was chosen as I had never had figs before. I had a bit of trouble finding the figs though. None of the major grocery stores that I tried had any figs. I was able to find them at the St. Lawrence market. The figs that I got did not seem to be the ripest. They were a pale pink rather than the dark pink that I have seen in some photos. They were still pretty good though.

I made a few modifications to the recipe. The first thing that I did was cut it down to a single portion. I forgot to pick up the arugula and ended up just using the salad greens that I had in my fridge. I used gorgonzola cheese as it is one of my favorite cheeses. The salad was really good! The sweetness of the figs contrasted well with the saltiness of the pancetta and the creamy goodness of the cheese.

I am really glad that I got to try figs and I will be using them in a few more recipes while they are in season.

Palliard is a method of preparing meat in which the meat is flattened. The thiner meat cooks quickly and evenly. I liked using this method as it is always annoying when cooking a chicken breast and the thinner parts are done but the thicker parts are still pink in the middle.