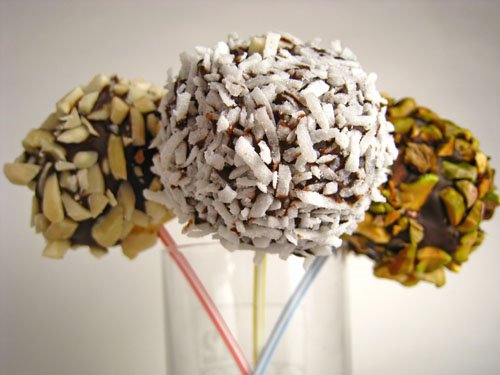 This months Daring Bakers challenge was cheesecake lollipops. I was looking forward to making this months challenge because, well, its cheesecake, covered in chocolate, on a stick! What a great idea!
Cheesecake is one of my favourite desserts and I have made it a few times. This cheesecake recipe was different than the one that I usually make and I was looking forward to seeing how it turned out. The original recipe called for five bricks of cream cheese which was way too much for me so I reduced it to three. Unfortunately I did not have a pan that was big enough to hold my 8×8 inch baking pan so I was not able to bake it in a water bath. I was kind of looking forward to seeing how baking a cheesecake in a water bath would work out. Next time maybe. It worked out fine without the water bath and the cheesecake tasted great!
Assembling the lollipops was kind of fun. I could not find lollipop sticks so I used some small straws. They were ok but they really couldn’t hold the weight of the chocolate cover cheesecake. That was ok because once you picked them up they disappeared quite quickly. 🙂 I also forgot to pick up the vegetable shortening that the original recipe called for when I went grocery shopping. I tried using butter instead but the chocolate just did not get runny enough so I added some cream. It ended up being a chocolate ganache coating. It worked and that was what mattered. I decided to coat my chocolate covered lollipops in coconut, chopped almonds and chopped pistachios.
Given that I have made cheesecake and chocolate ganache before this challenge was came together fairly easily. It took a lot of time though with all of the cooling, chilling and freezing though. The results were well worth it. The chocolate covered cheesecake lollipops were really good! My favourite were the pistachio covered ones and they disappeared quickly. Overall I really enjoyed this challenge and its yummy results. It’s not too early in the morning for a chocolate covered cheesecake lollipop…

Take a look at the other Daring Bakers creations.