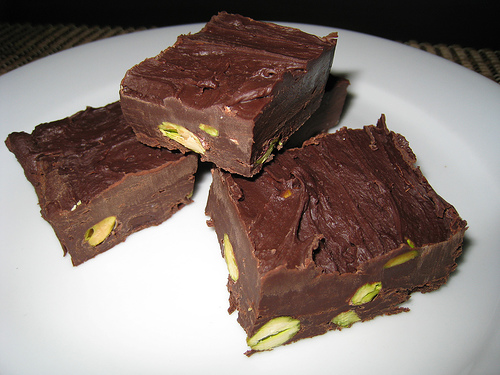 It has been a long time since I have had fudge so when I came across this post about a quick chocolate and pistachio fudge I was immediately craving some. I had just discovered pistachios a couple of weeks ago I was really interested in trying them in a chocolate fudge. I know that this is not a recipe for real fudge but it looks like fudge and sounds both tasty and easy. I thought that I had all of the ingredients on hand so I decided to make it right away. It turned out that I only had 2 3.5 ounce bars of dark chocolate so I had to cut the recipe down. The fudge was really easy to make. The hardest part was waiting for the fudge to set! The condensed milk and butter transformed the previously solid chocolate into something that although it felt solid to the touch, it seemed to melt in the mouth. The salty pistachios nicely contrasted the surrounding sweet chocolate. This fudge is supposed to freeze well though I do not think it will last long enough to require it.