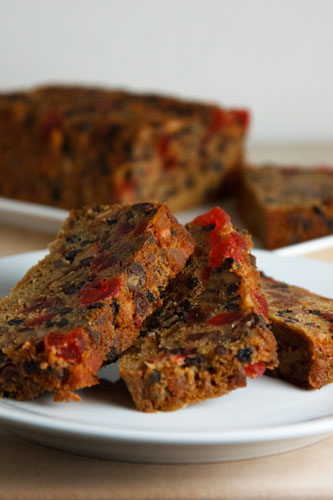 Though I am sure that I have had Christmas fruit cake before I did not really remember it. Given that and the controversy around fruit cake when I saw some posts about Christmas cake I knew that I would have to try making one to find out. All of the recipes that I saw called for making the cake a few weeks ahead of time to let it mature. Many of the recipes called for “feeding” the cake brandy on a regular basis while it matured. I did not want my cake to end up being too heavy with brandy so I decided to just soak the fruits in some brandy and then I wrapped the cake in cheese cloth that was soaked in brandy while it matured. Some of the recipes that I came across called for adding a layer of marzipan and a layer of icing but I wanted to keep my fruit cake nice and simple so I skipped the frosting layers. After waiting for over a month I finally unwrapped the fruit cake to try today. I am not really sure why fruit cakes have such a bad wrap as this fruit cake was really good. It was nice and moist and full flavour! The cake had a hint of booze without being overwhelmed by it. I think that I will be making a Christmas fruit cake again next year.