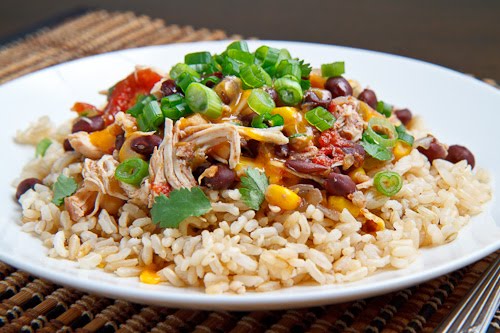 Chicken santa fe cooked in a crockpot for a quick and easy meal that is full of flavour.

Over the last little while I have come across a number of tasty looking crockpot recipes and that reminded me about the crockpot that I picked up over a year ago and hardly used. The only thing that I have really done with it so far is pulled pork, and it is really good at slowly braising pork until it is pull apart tender, but I had always wanted to try doing something more with it. I had always liked the idea of being able to put some ingredients into a crockpot, walk away for a few hours and come back to a fully cooked meal with no fuss and minimum effort but I had never gotten around to trying it out. Even though the holidays are done and the new year is hear, I have been pretty busy and I figured that it was the perfect time to get into some crock pot cooking and I wanted to start with this tasty recipe for crockpot chicken santa fe that I found on Skinny Taste 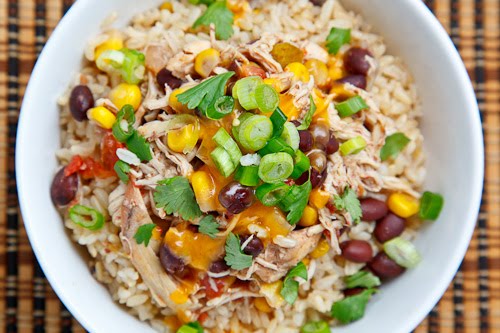 Since one of my goals of experimenting with crockpot cooking was to save a bit of time, I decided to test the recipe out on a busy weekday where I could get everything into the slow cooker in the morning before leaving for work. However, I could not resist spending a few minutes in the morning caramelizing the onions and chicken just a bit before transferring them to the slow cooker to add a bit of flavour even though you could easily skip that part and just throw everything into the slow cooker. I was hoping that things would be quick and easy and it was just as simple as putting everything into the crock pot in the morning and pulling the chicken out at night to shred before serving! The most amazing part was when I got home from work and opened the door to the aroma of a fully cooked meal and when it hit me and I knew that I would be eating a tasty meal that night with only of five minutes of work ahead.
Feel free to garnish your chicken santa fe with a bit of cheese, sour cream, avocado or whatever you wish! A bit of cheese never hurts! 🙂 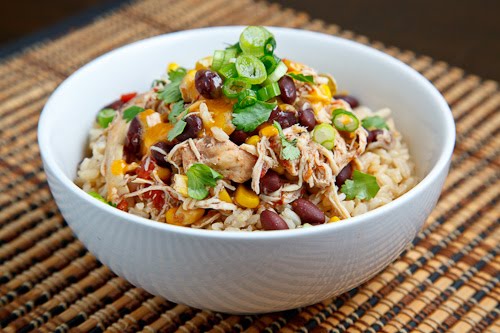 Chicken santa fe cooked in a crockpot for a quick and easy meal that is full of flavour.

Option: For One-Pan: Make this a one-pan meal by adding 1 cup of rice and 2 cups broth or water (or 8 ounces of pasta and 2 1/4 cups broth or water) to the sauce after step 6 and simmer, covered, until cooked, about 20 minutes (or 12 minutes for pasta).
Similar Recipes:
Corn and Black Bean Tortilla Pie
Corn and Black Bean Quesadillas
King Ranch Chicken Casserole
Hoppin’ John