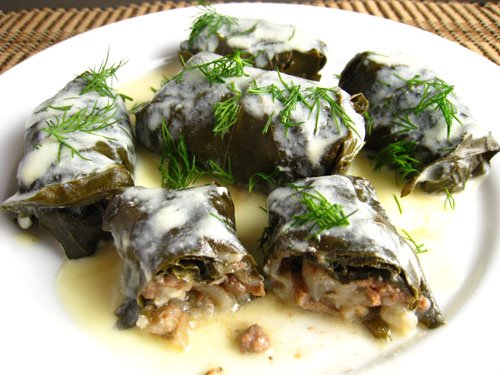 Dolmades are grape leaves that are stuffed with various ingredients. I had never eaten grape leaves before and the idea of stuffing them with a tasty filling sounded really good. I have been wanting to try making them ever since I saw Peter’s dolmades post. I recently came across a jar of grape leaves and the dolmades quickly made it to my meal plan.
I had a bit of trouble getting the grape leaves out of the jar as they were packed in so tightly but after that they were fairly easy to work with. I covered the grape leaves in boiling water to make sure that they were tender. (You could also boil them briefly.) I also rinsed them a few times to remove any salt from the packing liquid. The grape leaves that I got had their stems removed so that was one less step that I had to do.
Overall the dolmades were pretty easy to make though it took a bit of time to stuff all of them. They turned out pretty well. One of the reasons that I really enjoy Greek cuisine is because it commonly includes lots of mint and dill which are two of my favorite herbs. With the herbs, feta and avgolemono sauce the dolmades were really tasty! The grape leaves themselves were nice and I look forward to using them again.