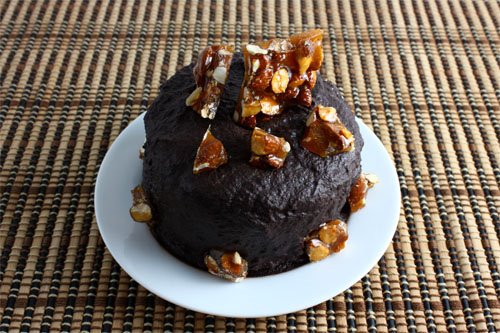 This months Daring Bakers challenge was a filbert gateau with praline buttercream. When I first read the title of the challenge I was pleased as it sounded good. Unfortunately as I read the instructions I realized that I would not be able to complete the challenge as it was. The recipe called for grinding hazelnuts into a flour and grinding praline into a paste. I do not have a full food processor and my mini chopper is on its last legs and is not nearly capable of grinding nuts. I decided that I would at least try and come up with something and I was thinking that an almond themed cake would be nice.
Filbert Genoise
I had some almond meal on hand and I decided to use that instead of grinding the hazelnuts into a meal. I did not want a large cake all for myself so I cut the recipe in half. I used my 2 small 4 inch spring form pans and 2 ramekins to bake the cake and this allowed me to make 2 small 2 layer cakes. One thing that I have been enjoying about the DB challenges is that there is no shortage of beating in them. I really need to pick up a mixer. For this challenge I fell back to my trusty pair of forks. 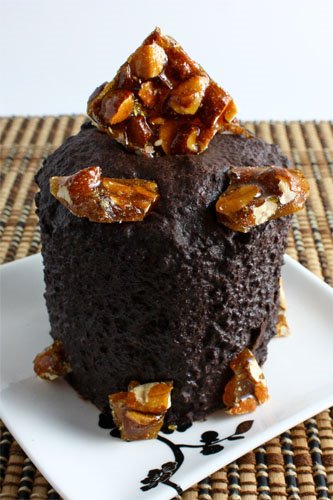 Simple Syrup
Continuing with the almond theme I added a splash of amaretto to the simple syrup.
Swiss Buttercream
This is the third time that I have made buttercream and each time has been easier than the last. This time it came together really quickly. My biggest problem now is trying to not eat it all before it gets onto the cake. Since I would only be doing two layers instead of 3 and since I have no skill in decorating with buttercream I cut the recipe down to a quarter of its original size. I also added a splash of amaretto to the buttercream.
Chocolate Ganache
The last time that I made a chocolate ganache glaze it came out pretty good with a nice glossy finish but this time it did not work at all. The chocolate ganache was not shiny at all and it had a texture that just would not smooth out. At least it still tasted good. 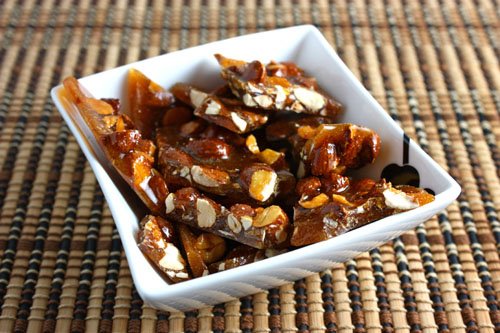 Almond Praline
The original recipe called for the praline to be ground into a paste and mixed in with the buttercream which sounded really good. Since I could not grind the praline into a paste I decided use the praline as a decoration on the cake. I went with chopped almonds rather than the hazelnuts. I think that it came out as more of an almond brittle rather than almond praline but it tasted great! 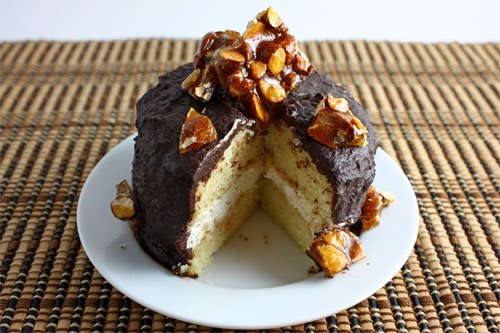 I ran into a few troubles along the way but I ended up with a tasty cake. I really enjoyed the almond flavour throughout the cake. I am really glad that I got to make the almond praline/brittle as it was really good. I am going to have to work on my cake decorating skills. It’s time for me to go and look at all of the other Daring Bakers wonderful creations.

Filbert Gateau with Praline and Buttercream