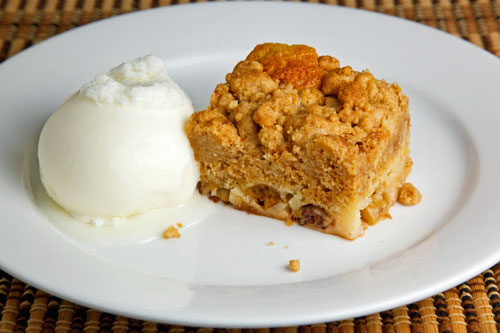 Someone recently asked what you could do with gooseberries. Although I enjoy picking up some gooseberries every Summer I realized that I have never really done anything with them other than just snack on them. Given that gooseberries are tart the recipes that were coming to mind were rhubarb recipes as rhubarb is similarly tart. While going through my rhubarb recipes I came across the rhubarb crumb cake that I had made a while ago and really enjoyed. I figured that gooseberries would work just as well as rhubarb in the crumb cake and I pretty much just did a straight swap and used the recipe as is. This crumb cake recipe may be a bit long but it is pretty straight forward and easy. The gooseberry crumb cake turned out very nicely! The tart gooseberries went really well in the sweet crumb cake and I liked the bit of texture that the seeds provided. Of course a melting scoop of vanilla ice cream went really well with a warm slice of gooseberry crumb cake.