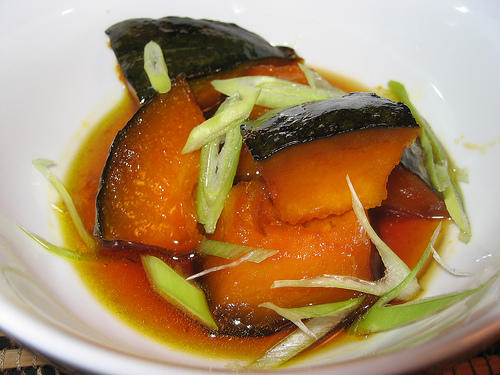 Not too long ago I came across this recipe for “Kabocha Simmered in Caramel Sauce”. The dish sounded really interesting. I had been wanting to try kabocha and simmering it in caramel sauce sounded like it would be really nice. Since then I have been eating and enjoying a lot of kabocha and I finally found a place to fit this dish into my meal plans. Kabocha is a winter squash that is also called a Japanese pumpkin. You could also use a pumpkin or another type of winter squash.
I decided to try making the caramel sauce the dry way. The sugar melted and turned golden without a problem. When I added the water the sugar seized but melted again with a bit of stirring. While making the sauce I noticed that the metal spoon that I was using to stir was covered in a really solid coating of crystallized sugar. I tried cutting it off with a knife but it had no effect on it. I was really worried that I might have ruined my sauce pan because it also had a ring of hardened sugar around it. Luckily the sugar slowly melted away under hot tap water. In the end the caramel sauce was good but I think that I should have let it get a bit darker.
The final result was pretty interesting. I like the way the sweetness of the pumpkin combined with slightly bitter caramel sauce. I will be keeping this recipe to use again.