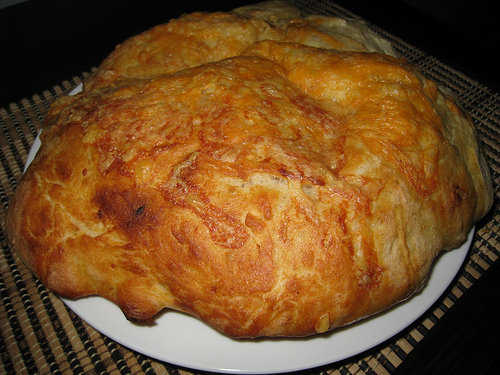 This months Daring Bakers challenge was a savoury potato bread. I liked the sound of making a bread with potatoes. Potato bread sounded like it would be a bit heavier than normal bread and really moist. Of course I left it to the last minute… (I really need to start the next challenge sooner.) I cut the recipe into half of its original size and made sure that I had enough ingredients to make two batches in case the first one didn’t work out too well. The challenge was to make the potato bread and it was left to us to decide what to do with the bread. You could use the potato bread dough to make a loaf, buns, etc. I decided to go with the suggested focaccia bread. A focaccia is a flat bread with optional toppings baked on. I decided to go with a cheese topping. You really can’t go wrong with golden brown cheese baked on bread.
Making your own bread from scratch is surprisingly easy. It takes a bit of effort and it requires a bit of time but over all it is not too difficult. Everything went well and the focaccia turned out great the first time. I really enjoyed the aroma of the bread baking in my apartment. I started to eat the bread as soon as it was cool enough to do so. It was really good! It is hard to beat fresh, still warm from the oven bread! It was nice and moist; soft on the inside and crispy on the outside. I finished the entire focaccia over the course of the day!

Take a look at the other Daring Bakers.