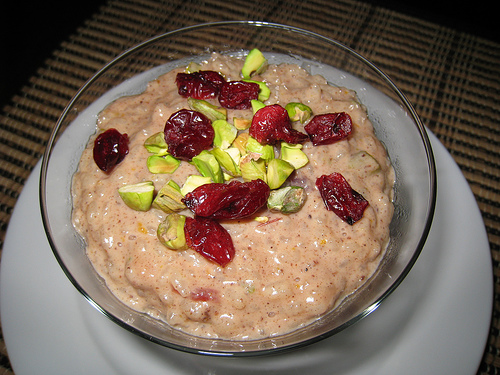 This months Sugar High Friday theme is pudding. I was pretty pleased with the pudding theme as I have never made pudding before and I have not really eaten a lot of pudding. I have been seeing some really nice looking pudding on food blogs for a while and this was the perfect excuse to try some. There are a lot of different types of pudding out there and I though that I would start with a simple rice pudding. Making rice pudding is similar to making rice except that you use more liquid and you cook it a bit longer. You can do so many different things with rice pudding. You can use different types of rice. I used Japanese short grained rice. You can use different liquids such as milk, coconut milk, etc. You can use different sweeteners like sugar, honey, maple syrup, etc. You can make it with spices such as cinnamon, nutmeg, etc. You can add different things like fresh fruit, dried fruit, nuts etc. Since it was the holidays I decided to go with a holiday theme of cinnamon, orange zest, cranberries and pistachios. I was hoping that the rice pudding would end up white with the red cranberries and green pistachios but the cinnamon darkened it. The aroma of cinnamon and orange while it was cooking was pretty amazing. I could not wait for the pudding to cool down so I ate it warm. I will have to try cooking it in the fridge the next time to see how it is. The rice pudding tasted really good. It was nice and creamy and the cranberries were chewy and the nuts were crunchy. I look forward to experimenting with variations of rice pudding and other types of puddings. I wonder if you can cook rice pudding with milk in a rice cooker?

Rice Pudding with Cranberries and Pistachios