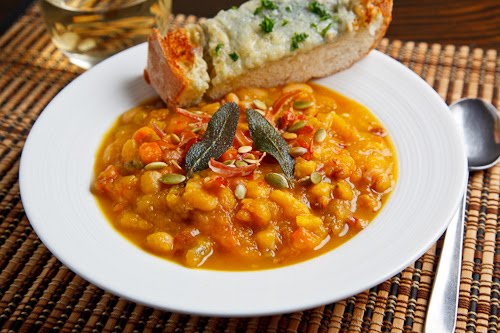 A thick and hearty roast pumpkin soup with pancetta, sage, white beans and smoked turkey that is just packed with flavour!

Pumpkins are in season right now and although a lot of varieties of winter squash are available all winter, pumpkins usually disappear quickly after Halloween so I have been wanting to do more with them while they are here. In fact I have several pie pumpkins sitting on my counter just waiting to be used and I figured that it was a perfect time to do so. With the cooling weather I was thinking that a pumpkin soup would hit the spot.
After contemplating about pumpkin soups for a while I settled in on the idea of a thick soup base using pumpkin puree flavoured with pancetta and sage. With that in mind I started to build the soup up with a base of onions, carrots, celery and garlic. From there I added some broth and pumpkin puree as the liquids followed by the pancetta and sage for the flavour. I particularly enjoy beans in soup and since I could not shake the idea of adding some white beans, I did so to make the soup even heartier. I also kept coming back to the thought of using a ham hock to add even more smokey flavour and then I remembered seeing smoked turkey legs at the store and the turkey and pumpkin combo sounded perfect so I went with that. Both a ham hock and a smoked turkey leg can be simmered in soups to impart their tremendous flavour to the soup and then if you like you can pull the meat off of the bones and add it to the soup after it is done simmering. With that decision made, I knew that my roast pumpkin soup would just be packed with flavour and I had my recipe! 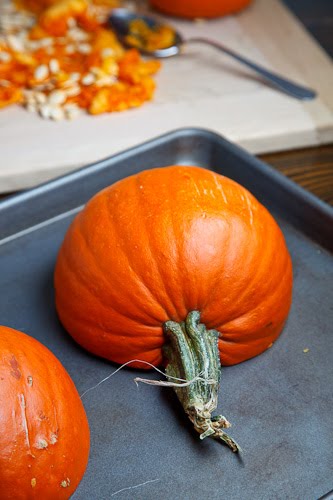 Although it takes a bit of time, this soup is pretty easy to prepare. Making your own pumpkin puree but it is actually really easy and that is the route that I took but you could easily use canned. Speaking of pumpkins, this soup could also be made with butternut squash or any other kind of winter squash such as kabocha. If you are roasting your own pumpkin puree you can do that a day ahead of time to lighten the load on the day that you make the soup. After you have your pumpkin puree, this soup is as easy as dicing some vegetables, sauteing them, adding all of the ingredients and simmering for a while to let all of the flavours come out and mingle. Note: I wanted a nice and thick and chunky soup but if you prefer a smoother consistency you could easily add more broth and puree all of the diced vegetables and beans.
I served this savoury roasted pumpkin and pancetta soup with sage and smoked turkey garnished with crumbled crispy fried pancetta, crispy fried sage and toasted pepitas. While I was thinking about ideas for pumpkin soup recipes one Idea that I had was a simple sweet pumpkin and tangy gorgonzola soup and since pumpkin and blue cheese go so well together I incorporated that idea into this soup by serving it with some gorgonzola garlic bread! 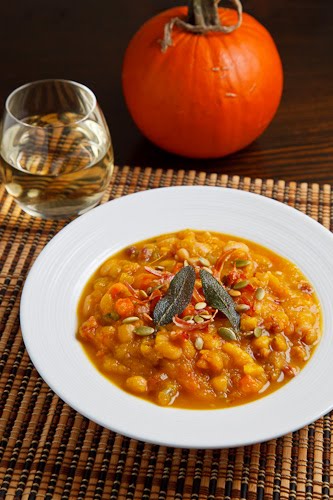 A thick and hearty roast pumpkin soup with pancetta, sage, white beans and smoked turkey that is just packed with flavour!