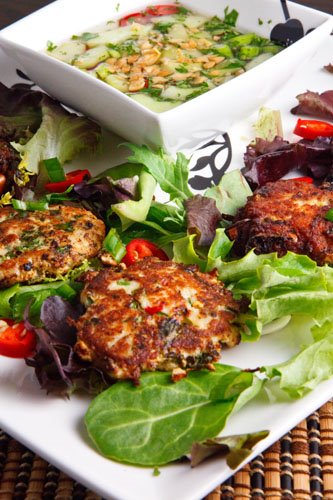 I have been enjoying making my own fresh Thai curry pastes ever since I discovered how easy they were to make. Since they keep well in the freezer I almost always have some on hand. I recently made a new batch of red curry paste and I was looking for some new recipes to try using some of it in. One dish that I kept coming across was tod mun pla or Thai fish cakes that used red curry paste in the cake mixture. Some of the things that I liked about the tod mun pla recipes were that they included a green vegetable in the form of long beans and that they also used a lot of fresh herbs. The fish cakes promised to be really tasty all by themselves but I found that they were often served with a cucumber dipping sauce which also sounded good. Many of the recipes that I came across called for fish paste but I decided to just use some chopped up white fish which in this case was tilapia. The fish cakes were pretty easy to make. You pretty much just mix everything, form patties and fry them in oil until golden brown. You could deep fry the fish cake but I chose to shallow fry them as it would be easier. The tod mun pla were really tasty! I was right, they were packed with so much flavour that they hardly needed the dipping sauce but it provided some nice contrasting flavours and textures. The fish cakes had a nice crispy outside and the insides were nice and warm and soft and moist. I really liked the freshness that the herbs brought to the cakes and overall they were a really nice light meal.