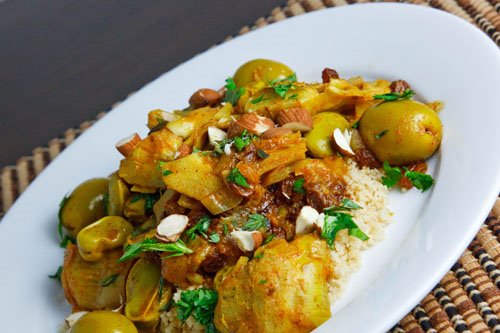 I have slowly been getting into Moroccan cuisine and I have really been enjoying it. In particular I have really been liking the spice blends and flavour combinations in Moroccan tagines. A tagine is a dish that is made in a tagine clay cooking pot that is particularly good at braising. Despite the fact that I do not have an authentic tagine I have been enjoying all of the flavours that slowly braising the ingredients brings out. A while ago I came across a recipe for an artichoke and fava bean tagine on Elra’s Cooking that sounded good. I have really been into artichokes lately and I had been wanting to do more with fava beans so it did not take much to get me to add this to my meal plan. The only problem was that the locally grown fava beans had yet to make an appearance so I patiently waited for them. This weekend I found the fava beans and immediatly picked some up.
I had really liked the chicken tagine with olives and preserved lemons that I had made a while ago so I decided to start with that recipe and treat it more like a vegetarian tagine with the artichoke hearts and the fava beans forming the base. Next up was the flavours of the olives, raisins and preserved lemons followed by a nice Moroccan spice blend and some harissa and honey for a bit of heat and some sweetness. I served the artichoke and fava bean tagine on some whole wheat couscous and I garnished it with some chopped parsley, mint and almonds. The artichoke and fava bean tagine turned out really well! What an amazing blend of flavours and textures! The tagine was just packed with flavour and the artichoke hearts and fava beans worked really well in it. I am glad to have found another recipe to enjoy fava beans and this recipe will definitely be on my list of things to make with fava beans in the years to come. I am now looking forward to exploring even Moroccan cuisine.