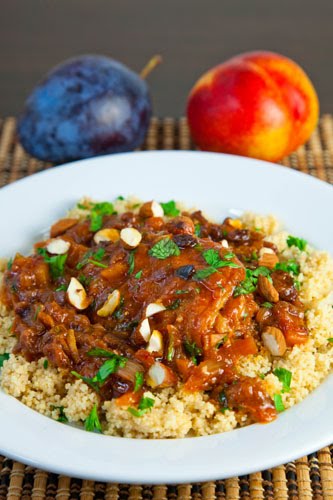 I have been into Moroccan food lately and in particular tagines. A tagine is a clay pot that is really good at braising and any dish made in a tagine is also called a tagine. Moroccan tagines very commonly include dried fruits such as prunes, dates, apricots, raisins etc. which typically add a really nice sweetness to the dish. I had not even thought about using fresh fruit in a tagine and when I came across the idea for a Moroccan nectarine and plum chicken dish on Christie’s Corner I knew that I would have to try it. Given that summer is done and it’s fruits are quickly disappearing from the markets I had to act quickly and the dish made it to my meal plan right away. I was in luck as the farmers market was still full of both the fresh locally grown plums and nectarines. I pretty much just took my standard Moroccan tagine recipe and replaced most of the dried fruit with fresh cut pieces of the nectarines and the plums. I did however leave some raisins in the tagine as I was a bit worried that the fresh fruit would not bring as much sweetness to the dish as the dried. The fresh nectarines and plums worked really well in the chicken tagine! The fruit pretty much broke down and formed the base of a thick and tasty sauce. The sauce was a really nice blend of fruity sweet, spicy and salty with many layers of flavour and it went really well with the chicken. I served the chicken tagine on some cilantro whole wheat couscous.