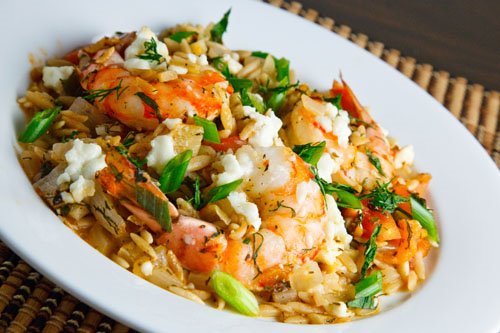 With the Taste of the Danforth Greek food event kicking off tonight here in Toronto I was in the mood for some more Greek food. I really like Garides Saganaki , a shrimp and feta dish that is baked in a tomato sauce, that I normally serve with some crusty bread to soak up the tasty sauce. The last time that I made it I thought that it might also be good as a baked pasta dish and I was just itching to try it out. I decided to go with a whole wheat orzo for the pasta which I added to the tomato sauce after they were both cooked followed by the shrimp and feta. The whole thing went into the oven where the shrimp cooked and the feta started to melt into the sauce. The baked shrimp and feta dish turned out great! The shrimp, feta and tomato sauce combo worked just as well in a pasta dish as it did by itself. The pasta absorbed a lot of the extra juices from the sauce along with all of its tasty flavour with no bread required.