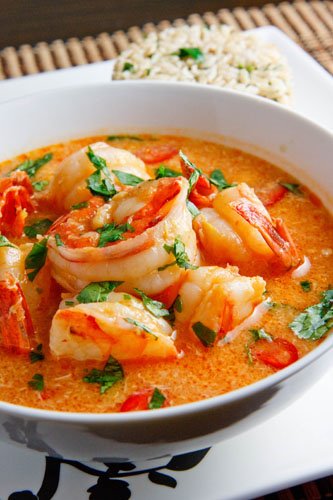 As you probably already know, I am a bit of a shrimp fanatic and I am always looking for tasty new ways to enjoy shrimp. I recently came across a really interesting recipe for Singapore chili prawns on Almost Bourdain that sounded so good that it quickly pushed its way to the top of my to try list. Not that it takes much to get me interested in a shrimp dish but the two things that caught my attention with this recipe were the use of the sweet chili sauce and the egg drop. I picked up a bottle of sweet chili sauce a while ago and I really liked it but I have only used it a few times since. I was looking forward to using the sweet chili sauce with shrimp! A while ago, when I made the Chinese hot and sour soup I was introduced to the concept of slowly pouring an egg into a hot liquid while stirring. The egg quickly cooks into little particles that give the liquid an amazing texture in addition to adding some protein to the sauce itself. Speaking of hot and sour, these chili prawns have both hot and sour elements along with sweet elements.
The Singapore chili prawns were really quick and easy to make and they turned out great! The sweet, hot and sour tomato sauce was so tasty and it went really well with the succulent prawns. I liked this dish so much that I have already made it a second time. The first time I served it with some cilantro and lime rice and the second time I served it with some crusty bread to soak up the extra sauce which saved me from having to lick the plate clean. 🙂