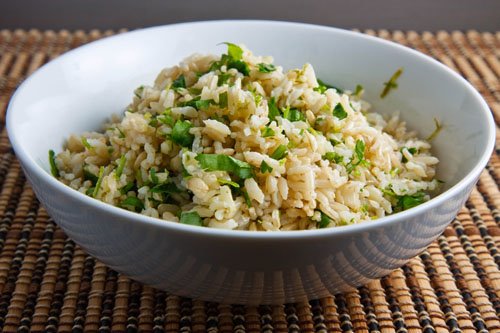 One of the things that I liked about Chipotles burritos was the cilantro and lime rice. I often enjoy trying to replicate recipes that I remember having had somewhere else and I knew that I would have to try making the cilantro and lime rice. Of course the first way to make it that popped into my mind was the simplest way, just mix in some chopped cilantro, lime juice and lime zest after the rice is finished cooking. This way has the advantage of being quick and easy and you can use a rice cooker to make it even easier. But I thought, why not take the opportunity to make it better. I like the flavour that toasting the rice in oil before cooking adds and since I was going to be using some oil anyways, why not add some onions and garlic to fill out the rice a bit more. I like to use brown rice whenever possible and I thought this was the perfect time to do so. The cilantro and lime rice turned out really well. It was light and fluffy and the lime juice and zest added a nice freshness to the rice. Cilantro is one of the flavours that I associate with Mexican cuisine so it was right at home in the rice as well. I used the cilantro and lime rice in the burritos that I recently made, though it would also make for a great side dish.