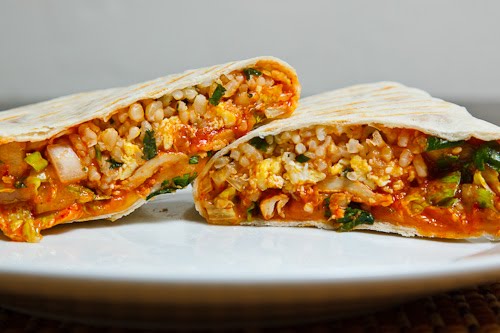 I had some leftovers from taco night and the first thing that came to mind was along the same vein, burritos. The tacos were on the smaller side and there was no way that the leftovers would fill a mighty burrito so I would need something to fill them out a bit. Rice is a perfect filler for burritos and I figured that the freshness of some cilantro and lime brown rice would be a perfect fit. I have been fascinated by the idea of the parent and child concept of using both chicken and egg ever since I came across the oyako donburi a Japanese chicken and egg rice bowl, where the translation is literally parent and child rice bowl. With that in mind the next filler was going to be a pair of eggs, scrambled. Though I did not use any cheese in the tacos I just could not resist using some in the burritos in the form of grated cheddar and jack cheese. With the cheese in there I wanted a way to melt it so I assembled the burritos making sure that the cheese was near the outside and then I grilled the burritos after rolling them up. The spicy chicken and egg burritos turned out really well! The chicken, eggs and cheese brought an nice spicy flavour base while the rice, lettuce and relish brought a great freshness. All of the flavours and textures combined really well to make one really tasty burrito! These burritos would for either dinner or for breakfast. What a great way to enjoy some of the leftover dak bulgogi !