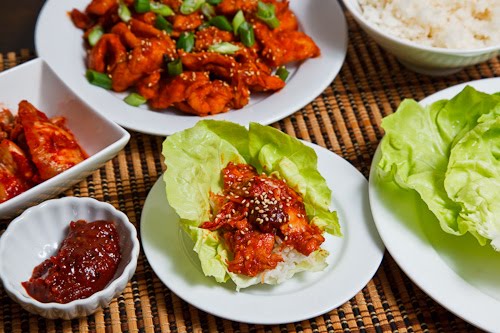 I had been craving some Korean cuisine for a while and it was finally time to satiate it. When I think of Korean cuisine I generally think spicy but a lot of the BBQ meats such as bulgogi (Korean BBQ beef) and kalbi (Korean BBQ short ribs) are actually marinated in mixture that is on the sweet side. I had been wanting to try a chicken version of the bulgogi but I also had a plan that required the chicken to have some heat. For the recipe I simply took the bulgogi , tweaked it a bit and added a good helping of gochujang , a Korean fermented chili paste. The Korean BBQ chicken turned out just as well as the beef version! I quite enjoyed the way the sweet marinade played with the heat and flavours of the gochujang and I could hardly resist snacking on the meat every time I passed it. I served the dak bulgogi with rice, kimchi and ssamjang (another spicy Korean paste) along with some lettuce leaves for wrapping. Although the meal was excellent, my craving was not satisfied, which was fine because as I said, I have a plan and I made a double batch of the dak bulgogi.