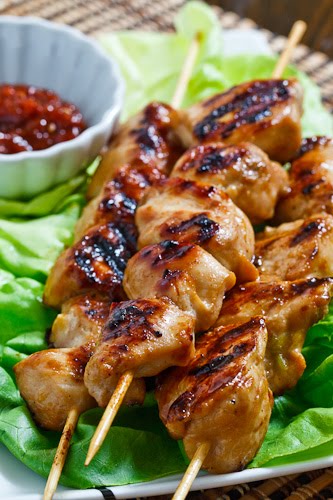 When I was making bulgogi , a Korean bbq beef, and in particular the chicken bulgogi , I could not help but think that the marinade would also work well on some grilled skewered chicken. The bulgogi marinade reminded me of a more complex teriyaki sauce that is sweet at heart but also packs a ton of flavour. With yakitori , a Japanese teriyaki grilled skewered chicken, being one of my favorite ways to grill up some meat on a stick, I itching to try the Korean bulgogi version. A quick search of the web led me to dakkochi, a Korean skewered chicken street food and I was set to go.
I went with my pretty standard bulgogi marinade recipe and even though I often like to add some heat in the form of gochujang, a Korean fermented chili paste, I decided to omit it for the chicken skewer version in favour of a sweeter profile. Normally when making bulgogi I cook all of that tasty marinade up with the meat so that I do not loose any of the flavour but since that was not possible for the skewered version I decided to strain the solids from the marinade, simmer it down to a sauce and use it to baste or glaze the chicken as it cooked. The bulgogi skewered chicken turned out great! The chicken was nice and tender and juicy and just dripping with flavour! You cannot go wrong with grilled skewered meat and this skewered chicken is no exception! I could not resist adding some element of heat to the meal so I served the chicken along with some ssamjang, a Korean fermented chili and bean paste condiment, and some bean sprout kimchi all wrapped up in lettuce leaves for one tasty meal.