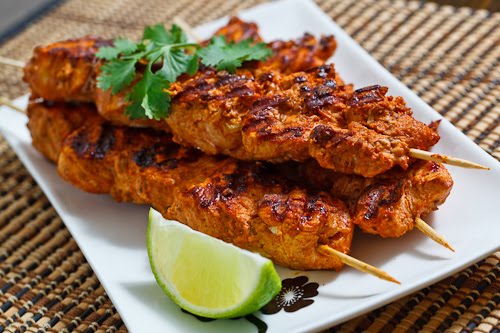 After watching Rob Rainford grilling up a storm Monday night, I had the itch to do some grilling as well. When I scanned through my ‘to try’ list the first thing to jump out at me was tandoori chicken. Tandoori chicken is an Indian roasted chicken dish where the chicken is marinated in a spicy yogurt that is seasoned with masala and chili peppers. I don’t know what it is about meat on a stick but it certainly is one of my favorite ways to grill up some chicken and I figured that a skewered, grilled, chicken tandoori would be really good. I went with a pretty simple recipe adding some fresh lemon, onion, garlic and ginger to the yogurt followed by some spices including a homemade garam masala and some ceyenne pepper and hot and smoky paprika to add some heat and to give it the traditional red colouring. After letting the chicken marinate over night I pulled it out of the fridge and when I opened the bag up I just had to pause for a moment to enjoy the amazing aromatics. The chicken grilled up quickly and it was nice and juicy and full of flavour and oh so good! You can eat this tasty tandoori chicken as is, as a part of a larger meal or you could use it in a wrap or even in a curry like chicken tikka masala.