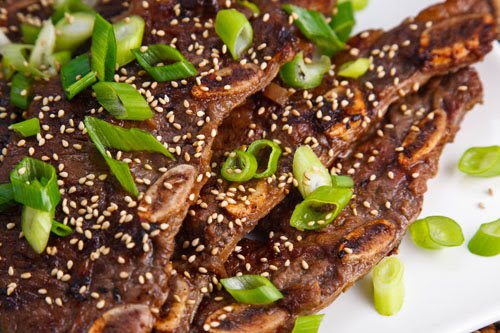 A couple of weeks ago I came across an article about the Kogi taco truck in California. The Kogi taco truck is a taco truck that serves fusion Korean and Mexican foods in various locations in California letting people know where they will be by way of twitter. Since Korean and Mexican cuisines are among my favorites I immediately went into research mode trying to find out as much as I could about the Kogi taco truck. The Kogi taco trucks main products are Korean BBQ tacos and burritos with the short rib tacos being their signature dish. Since I probably won’t be going to California any time soon I decided to try to create the Kogi taco experience at home and I thought that it would be a good idea to start with the short rib tacos. Of course a quick search of the internet brought up no results as far as Kogi recipes go, so I would have to come up with my own.
I figured that I would start with the most important part of the taco, the Korean BBQ short ribs otherwise known as galbi or kalbi. Kalbi is pretty much just beef short ribs that are marinated and the barbecued and there were no shortage of recipes on the web. One thing that I noticed about a lot of the recipes was that they were similar to the recipe that I used for Bulgogi (Korean BBQ Beef) even to the point of using grated Asian pears and/or apples as a part of the marinade. Having really enjoyed the bulgogi marinade I just decided to use a variant of that to use for the short ribs.
Kogi describes their short ribs being soft and tender and having them until the sugars from the marinade caramelize. I had a sweet marinade with sugars and I left the beef to marinate in it over night to make sure that they would be nice and tender. The Korean BBQ short ribs were pretty easy to cook and they turned out great! I made sure to grill the beef until it started to char and caramelize and doing so added a ton of flavour and a really nice texture to the beef. The short ribs were nice and tender and juicy and the slightly sweet caramelized goodness promised to go well in the spicy bbq short rib tacos.