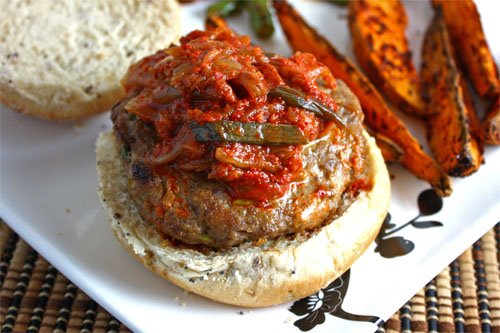 A while ago I made some bulgogi that I really enjoyed and I remembered thinking that a bulgogi burger would be a good idea. Bulgogi is a Korean dish of meat that is marinated in a sweet and salty marinade and then cooked over fire. Now that summer is here, it was the perfect time to try out my idea. I started with ground beef and the marinade from the bulgogi recipe. There was a lot of liquid in the bulgogi marinade, far too much for burgers, so I tried to reduce the amount of liquid in the recipe. I then went with the tried and true burger binding of an egg and some bread crumbs. The bulgogi burgers turned out really good! They held together nicely and yet they were super moist and just full of flavour. I of course had to have some of my homemade kimchi in the bulgogi burgers and it added even more flavour and a bit of heat. I served the bulgogi burgers with some baked sweet potato wedges and some steamed asparagus in a gochujang sauce .