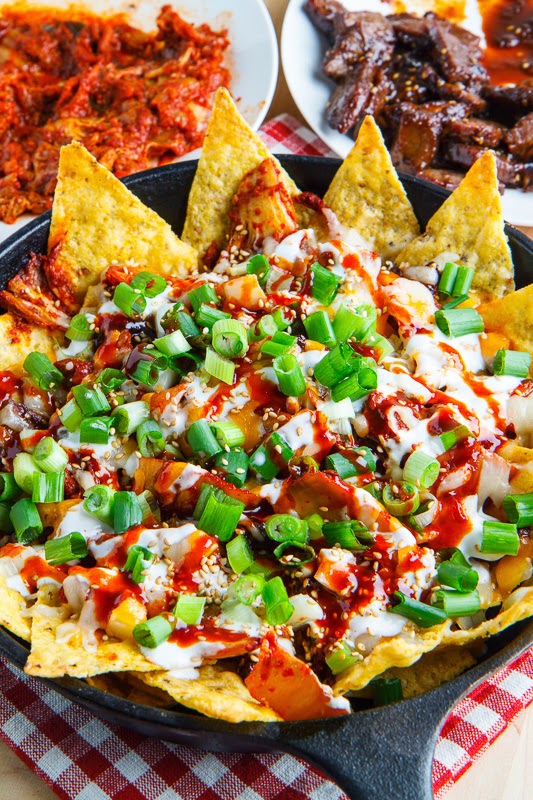 Korean themed nachos with tasty beef bulgogi (Korean BBQ beef), kimchi, plenty of melted cheese, sour cream and green onions. The sweet and salty bulgogi along with the melted cheese mellows out the spicy kimchi perfectly creating a tasty melody of pure bliss in your mouth!

One of my favourite game day snacks is nachos and this time I though that I would combine them with one of my favourite cuisines, Korean cuisine, and so I present to you these Korean themed nachos with bulgogi, kimchi and plenty of melted cheese! Bulgogi is Korean BBQ beef that is marinated in a tasty sweet and salty sauce that is absolutely divine all by itself but it gets even better in these nachos. Kimchi is fermented cabbage that is on the sour side and can be spicy but when combined with the sweet bulgogi and the melted cheese it mellows out and really brings these nachos together! From there you can top the nachos with what you want and I like to go with sour cream (well I actually use Greek yogurt instead of sour cream), green onions and sesame seeds. If you like things hot, you can’t go wrong with a spicy gochujang sauce or some sriracha! Of course everything is better when topped with a fried egg with a runny yolk so turn these bulgogi and kimchi nachos into a meal by adding some!

The Korean themed nachos being assembled. 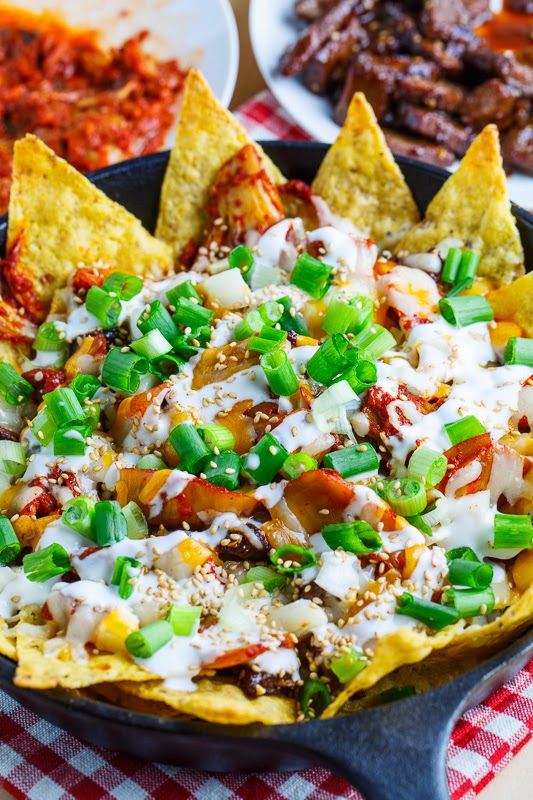 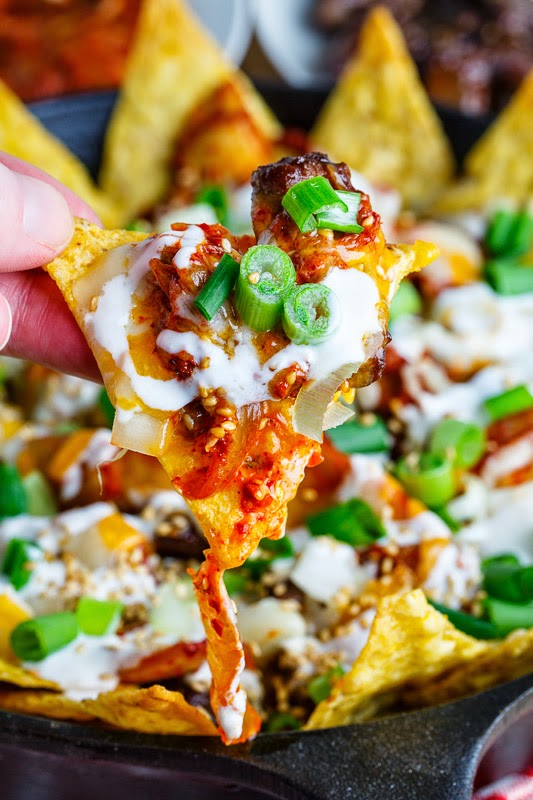 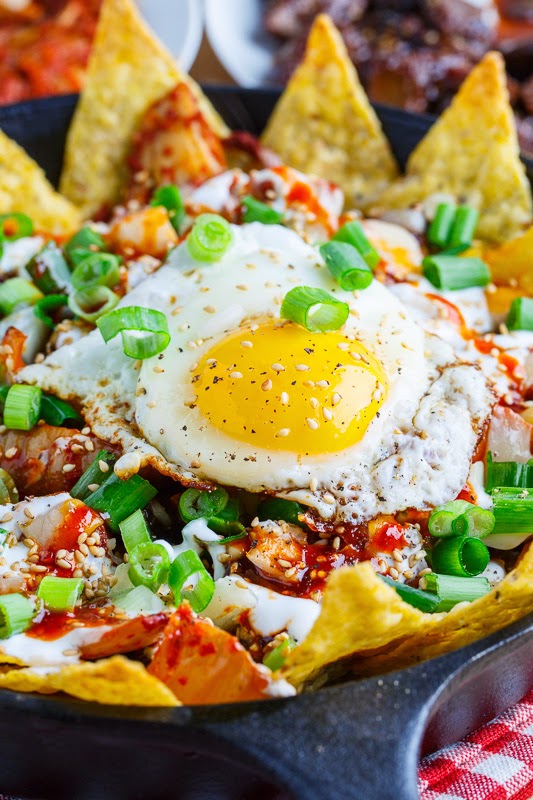 Of course everything is better with a fried egg! 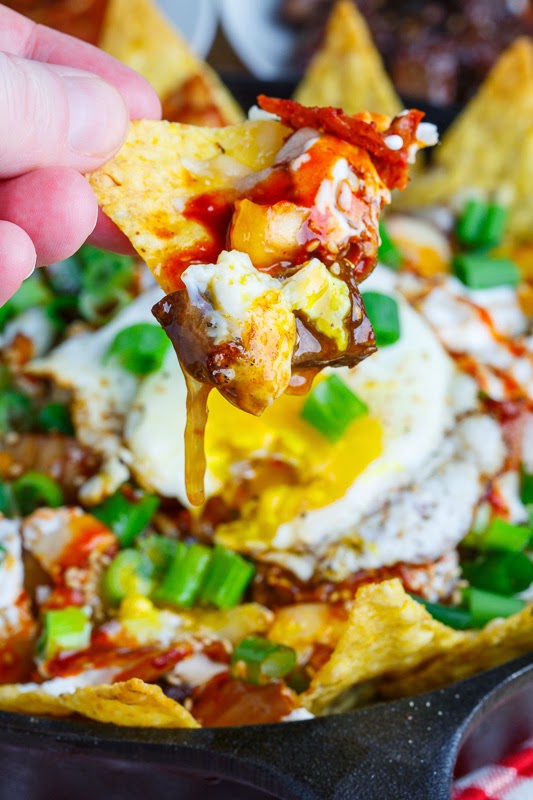 Especially one with a runny yolk! 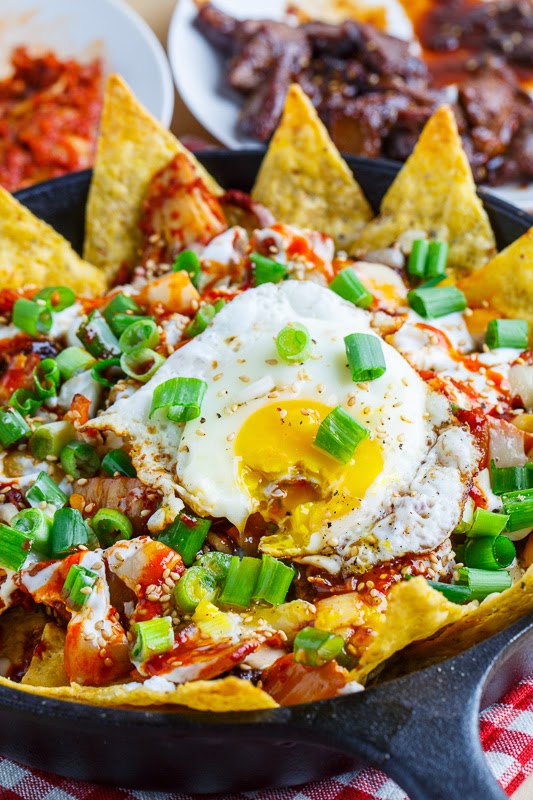 Korean themed nachos with tasty beef bulgogi (Korean BBQ beef), kimchi, plenty of melted cheese, sour cream and green onions. The sweet and salty bulgogi along with the melted cheese mellows out the spicy kimchi perfectly creating a tasty melody of pure bliss in your mouth!

Option: Use your favourite brand of store bought bulgogi marinade to save time.
Option: Instead of using an asian pear you can use another kind of pear, an apple or even a kiwi or pineapple.
Option: Replace the beef with chicken, pork or seafood.
Option: Use more or less kimchi to your taste. I like to make my own kimchi but it’s available in many grocery stores and it comes anywhere from mild to hot.
Option: Top with gochujang sauce for even more heat.
Option: Top with fried egg!
Nutrition Facts: Calories 459, Fat 17.1g (Saturated 8.2g, Trans 0g), Cholesterol 98mg, Sodium 658mg, Carbs 37.6g (Fiber 4.8g, Sugars 4.2g), Protein 37.8g
Nutrition by: