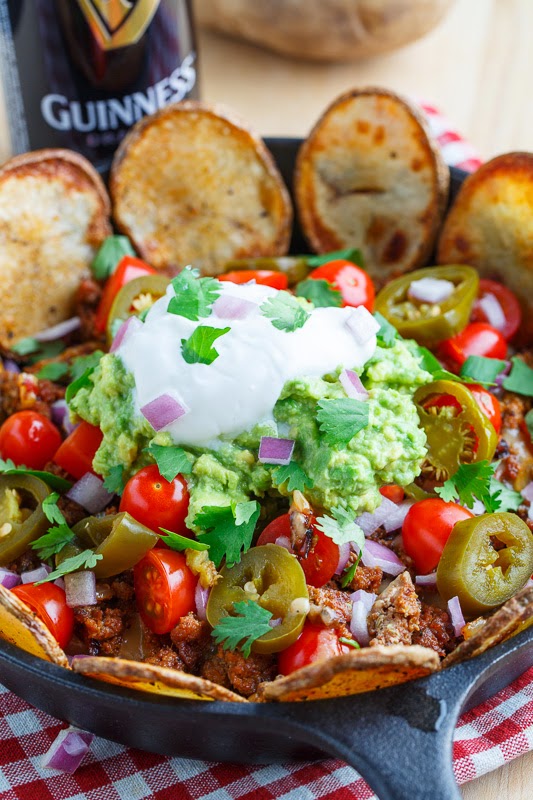 I hope that there is time for one last recipe for St Patrick’s Day and this one is a good one, Irish nachos in a Guinness and Irish cheddar sauce! Irish nachos are pretty much your regular nachos only they are made with home made potato chips, in this case crispy baked potato chips. The most important part of these nachos is of course the Guinness Irish cheddar sauce or fondue which allows you to get some Guinness right into your meal in addition to washing the nachos down with a pint! The sauce is pretty much a bechamel sauce where the liquid is Guinness which the Irish cheddar mellows out giving you a creamy and tasty sauce. Next up is the meat and I like to go for a spicy Mexican chorizo but any sausage will work and chopped up corned beef or even bacon would also be perfect. From there you can add your favourite nacho toppings and I like fresh tomatoes, onion, avocado, sour cream and cilantro. The perfect pub food for your St Patrick’s Day celebration!
Happy St Patrick’s Day! 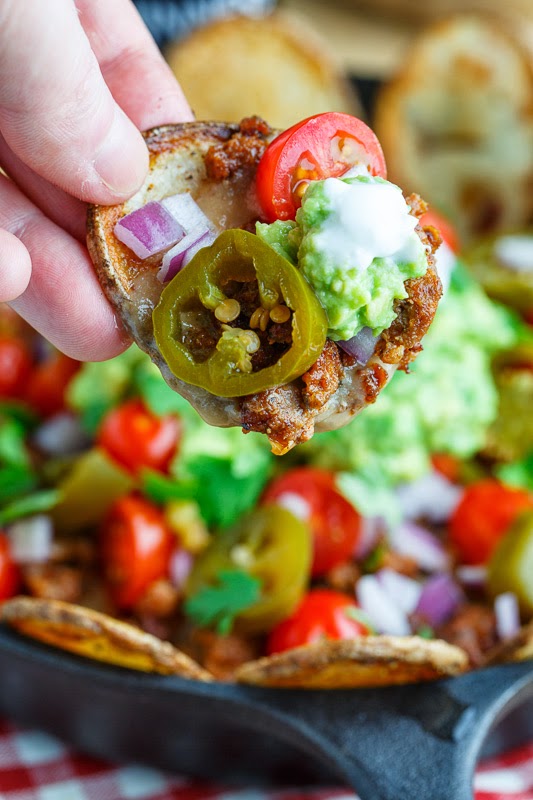 The Irish nachos being assembled:

For the potato chips:

For the meat layer:

For the Guinness Irish cheddar Sauce:

For the Irish nachos:

For the potato chips:

For the meat layer:

For the Guinness Irish cheddar Sauce:

For the Irish nachos:

Tip: Use a mandolin to slice the potatoes.
Option: Instead of the Mexican chorizo sausage, Irish or English sausage or bangers fit the theme and hot Italian sausages are also good. Use your favourite!
Option: Instead of using sausage, use shredded corned beef or plenty of bacon!
Option: Replace the avocado with 1 cup guacamole.
Option: Use your favourite nacho toppings.
Note: The cook time assumes that you cook the sausage followed by making the cheese sauce while the potatoes are baking.
Nutrition Facts: Calories 623, Fat 39.4g (Saturated 13g, Trans 0), Cholesterol 81mg, Sodium 895mg, Carbs 36g (Fiber 6g, Sugars 5g), Protein 28g
Nutrition by: