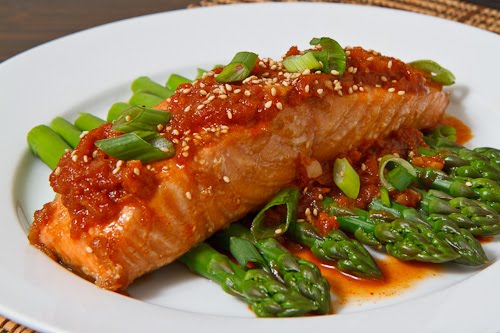 This weekend I got the chance to visit a Korean food festival here in Toronto and since then I have been thinking about Korean cuisine. While I was there I got to watch a chef make some bulgogi which is definitely one of my favorite Korean dishes. Bulgogi is a dish where the meat it marinated in a sweet, salty, spicy and all round flavourful marinade that uses many classic Korean ingredients. Over the last while I have made several versions of bulgogi including beef bulgogi , pork bulgogi , chicken bulgogi , and even a pineapple chicken bulgogi (which I use to make some Korean/Mexican fusion tacos al pastor ). I had been thinking about trying a salmon bulgogi for a while and now was the perfect to to do so.
For the salmon bulgogi recipe I simply used the bulgogi marinade recipe that I have been using for a while now. One of the things that I like about this recipe is that it uses a Korean/Asian pear to add sweetness and help tenderize the meat. Normally bulgogi meat is cut thinly and cooked in a pan or even a grill pan but for salmon fillets, I had to go with roasting them in the oven. I could not stand to see all of that tasty marinade go to waste so while the salmon was in the oven I simmered the marinade in a pan on the stove top and then I spooned it over the salmon before serving it. When I make other types of bulgogi I often use the meat in Korean/Mexican fusion dishes like tacos, burritos, quesadillas, etc. but this time I just wanted to enjoy the salmons buttery, melt in your mouth goodness. I served the salmon bulgogi over some simple steamed, in season asparagus to make it into a nice light meal.