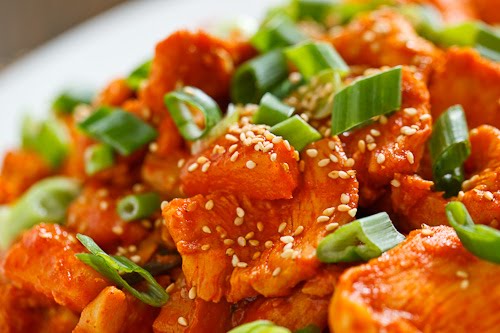 Bulgogi is a Korean barbecue dish where the meat is first marinated in a marinade that is just packed with flavour. When I make bulgogi , the marinade often includes a grated Asian pear and or apple to help tenderize the meat and add a bit of sweetness along with some extra flavour. The last time that I made dak bulgogi , the chicken version of bulgogi, I was thinking about the use of the fruit in the marinade and it reminded me of tacos al pastor , a Mexican slow roasted pork dish where the pork is often marinated in pineapple. I enjoy those tacos al pastor so much that I just had to try a pineapple version of dak bulgogi! For the recipe, I took the dak bulgogi recipe and replaced the Asain pear and/or apple with diced pineapple and the bit of juice that was at the bottom of the container of the freshly peeled pineapple that I used. When I cooked the chicken I threw the marinade, including the diced pineapple into, the pan as well so that I would still have those pineapple chunks in the finished dish.
The sweet and tangy pineapple worked so amazingly well in the gochujang spiced version of the dak bulgogi! The juicy pieces of pineapple were perfect in amongst the heat of the chicken. I made a really large batch of this stuff and I am looking forward to experimenting with it for the rest of the week!