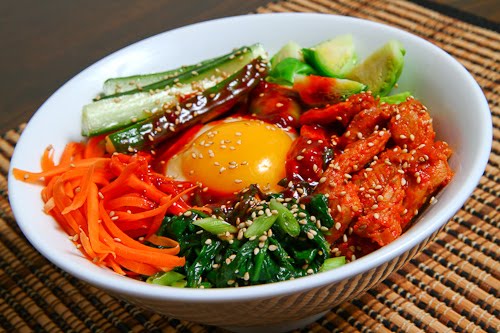 When I first discovered Korean cuisine, the first dish that I tried was bibimbap and it has been my favorite ever since. Whenever I make a Korean style meat such as the dak bulgogi (Korean BBQ chicken) I try to make sure that I will have enough of it leftover to use to make a bowl of bibimbap. Bibimbap is a mixed rice dish where pretty much anything goes so it is a great way to clean out the fridge at the end of the week. I like to start with some brown rice, a fried egg with a runny yolk, some leftover Korean style meat and then I pack on as many vegetables as I can. You can use seasoned vegetables if you like but I often like to keep it simple and just blanch the vegetables or eat them raw in the case of cucumbers, etc. The final component of the bibimbap that really makes it is the spicy heat and I like to use this gochujang dressing that is sweet, tangy and flavourful in addition to being nice and spicy.
Although the photo above is nice for presentation it tastes much better once you have mixed everything up so that the gochujang dressing and the runny egg yolk cover everything. 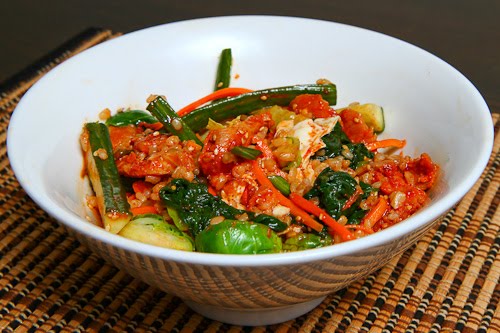