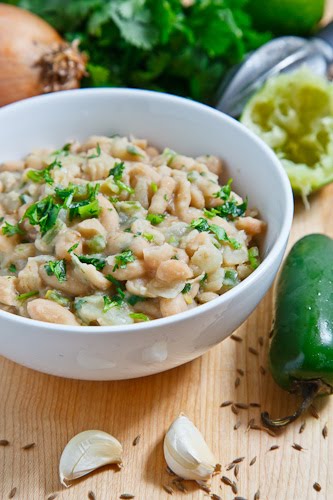 Creamy white beans with the warmth of jalapeno peppers served with fresh chopped cilantro and a splash of lime juice for an amazing brightness.

I wanted to include some beans in the asparagus huevos rancheros recipe that I was cooking up and since I wanted to keep the dish to green and white colours to go with the asparagus it had to be white beans. Just adding plain old white beans was, well, too plain and simply using white beans in refried beans did not seem right either. After some contemplation I decided to start with the basic refried beans recipe and make it greener. The first thing to go was the red chili pepper powder which I replaced with some green jalapeno peppers for the source of heat. While I was thinking about the recipe I kept coming back the the cilantro and lime flavour combination that I enjoy some much in my cilantro and lime rice and although I really was not sure about how the cilantro and lime would work with beans, I decided to go with it.
In the end I had nothing to worry about! The cilantro and lime duo worked fantastically well in the white ‘refried’ beans! Originally I had gone light on the cilantro and lime and after one spoonful I doubled up and used the whole lime and more cilantro. The combination of creamy beans with the bright and fresh lime and cilantro is addictively amazing! I had to restrain myself from polishing off the beans before they even made it to the asparagus huevos rancheros . I can definitely seen the cilantro and lime refried beans going in and with a lot of different dishes and I am looking forward to making them again!

Creamy white beans with the warmth of jalapeno peppers served with fresh chopped cilantro and a splash of lime juice for an amazing brightness.