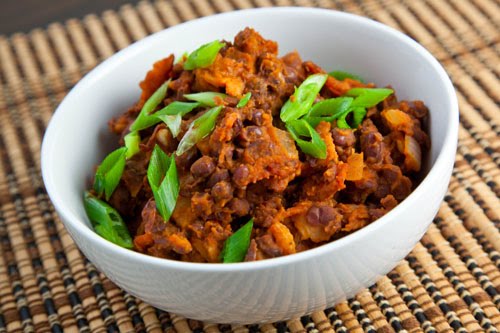 While I was thinking about the recent Korean and Mexican fusion dishes that I made recently, I was also thinking about side dishes and one thing that came to mind was Korean refried beans. When I make refried beans I often spike them with some freshly toasted ground chilies and cumin and I was thinking that a Korean version could use gochujang, a Korean fermented chili paste, and sesame both in the form of toasted and crushed seeds and oil. I usually fry my refried beans in bacon grease to add flavour and since I rarely have bacon grease on hand that means that I need to cook some bacon and if I am cooking it anyways I might as well throw it as well. Since pork belly is commonly used in Korean cooking I decided to replace the bacon with some uncured pork belly. Next up was the beans and since I generally regard azuki beans as Asian I decided to use them instead of the usual pinto or black beans. The Korean style refried beans were easy to make and they turned out really well. They were nice and creamy and full of flavour. I really like the way the spicy and tasty gochujang worked with the creamy azuki beans and the sesame aroma definitely made me think of Asian cuisine while I was eating it. The Korean style refried beans worked well as a side dish for the Korean BBQ short rib tacos .