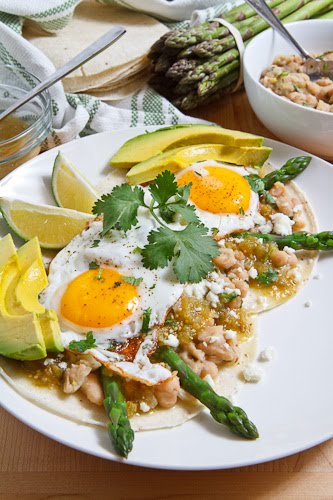 Asparagus served huevos rancheros style on tortillas along with cilantro lime beans and salsa verde topped with a fried egg and queso fresco.

A couple of weeks ago when the local asparagus season had just begun I had asparagus on my mind almost all the time. As fate would have it, one day I was going through some of my older posts when I came across one of my favourite breakfasts, huevos rancheros , and inspiration struck! How about a seasonal take on huevos rancheros with asparagus? Huevos rancheros normally consist of lightly fried tortillas topped with a spicy tomato based sauce and fried eggs but with the asparagus as the inspiration I was thinking about something more on the green side of things. With green as the concept, I knew that I would be using a tomatillo salsa verde in place of the tomato based chili sauce. I often serve huevos rancheros with a side of refried beans or just plain beans but I figured that since the asparagus was going to be thicker than the salsa verde that it would be nice to flatten things out a bit by surrounding the asparagus with beans right in the huevos rancheros. At first I was just going to use plain white beans but I thought that they were just a little too plain and simply using white beans in refried beans didn’t seem green enough. After thinking about it for a bit I came up with the idea of combining the recipes for refried beans and cilantro lime rice to make cilantro lime refried beans. And with that, the fried eggs, slices of avocado, crumbled queso freso and some cilantro, my asparagus huevos rancheros recipe was done.
I certainly have been enjoying these asparagus huevos rancheros for breakfasts this week! What an amazing combination of flavours and textures from the slightly crisp tortillas to the creamy beans and avocado to the juicy asparagus and lets not forget that magnificent runny egg yolk! I particulary like all of the bright spring like flavours coming from the tomatillo salsa verde, the limes, cilantro and especially the asparagus. What a great way to enjoy spring and some asparagus for breakfast! 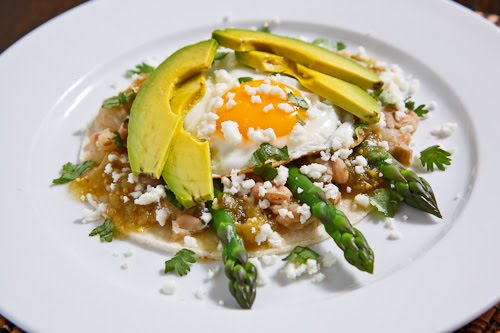 Asparagus served huevos rancheros style on tortillas along with cilantro lime beans and salsa verde topped with a fried egg and queso fresco.