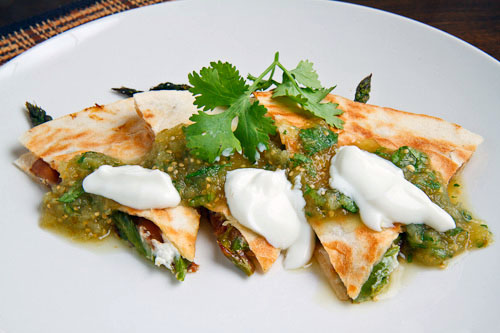 Roasted asparagus and caramelized mushrooms and onions covered in melted goat cheese all wrapped up in crispy, golden brown tortillas served with salsa and sour cream.

When asparagus season started one of the ideas that I came up with to try was asparagus quesadillas. I figured that you could not go wrong stuffing asparagus in between two toasted tortillas along with a bunch of ooey gooey melted cheese! Unfortunately that is about as far as I made it with the recipe; asparagus, cheese and tortillas, and that just did not satisfy me. I wanted something more but for the longest time I was having recipe block. 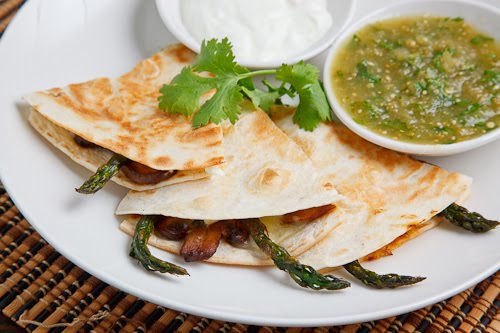 That all came to an end recently when inspiration struck and all of the pieces came together. The basic idea was to once again combine two of my favourite foods, asparagus and mushrooms, this time in a quesadilla. I had known from the beginning that the asparagus was going to be roasted to bring out its full flavour and the mushrooms just had to be caramelized and since I was already at it some caramelized onions came along for the ride. I seasoned the caramelized onions and mushrooms with some flavours that remind me of Mexican cuisine including cumin, smokey chipotle chili powder and a hit of fresh cilantro to round things off. Next up was the cheese and I wanted a nice melted creamy goat cheese but since melted goat cheese does not do all that great at holding things together I also added some jack to get the job done. 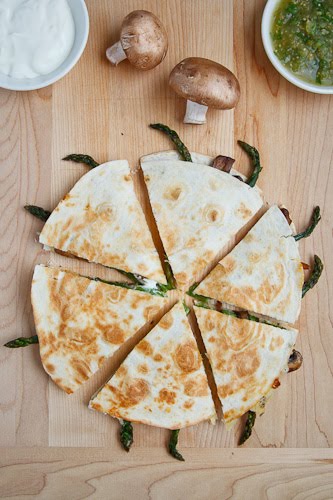 The asparagus and mushroom quesadilla recipe was all set to go but there was still the question of what to serve with them. Quesadillas are often served with salsas, sour creams, guacamoles, etc. for dipping. I had purposefully designed the recipe for these quesadillas so that they would be tasty enough to go it on their own but I figured there was no harm in throwing even more flavour into the mix. I decided to serve the asparagus and mushroom quesadillas with mildly spicy salsa verde and some cool and creamy sour cream. There is really two ways that you can go with your dips, you can serve them as dips or you can just pour them over the quesadillas. Although option number two is a bit messier, it is definitely the best way to ensure that every bite of your quesadillas has some dip.

Luckily I was still able to get some of the local asparagus at the farmers market and I was able set about making the asparagus and mushroom quesadillas right away. One of the things that I like about quesadillas is that they are so easy to make. These quesadillas take a little more time to make with all of the caramelizing and the roasting but they are pretty straight forward just the same.

Roasted asparagus and caramelized mushrooms and onions covered in melted goat cheese all wrapped up in crispy, golden brown tortillas served with salsa and sour cream.