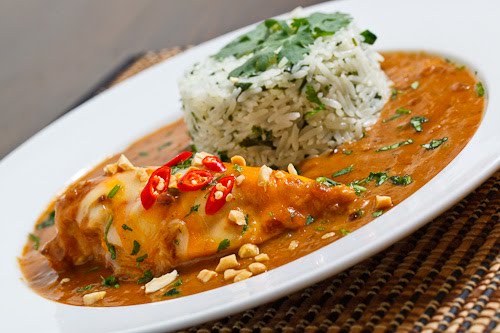 While I was enjoying experimenting with the Thai spicy peanut sauce last week I realized that it reminded me a lot of a Mexican mole sauce and that thought gave me an idea. Why not a Thai spicy peanut sauce chicken ‘mole’? And with that, this super easy and tasty Thai chicken ‘mole’ recipe was born. This recipe is as simple as simmering the chicken in the peanut sauce and some chicken stock until cooked and then garnishing it in some melted jack and cheddar cheese, chopped peanuts and cilantro. Despite being so simple, this chicken mole is really good! You really can’t go wrong when you start off with an amazing spicy peanut sauce and cooking the chicken in it like this resulted in some of the moistest and juiciest chicken that I have ever had. I served the Thai chicken mole with some cilantro and lime rice where I replaced the water with coconut milk to make a coconut cilantro and lime rice.