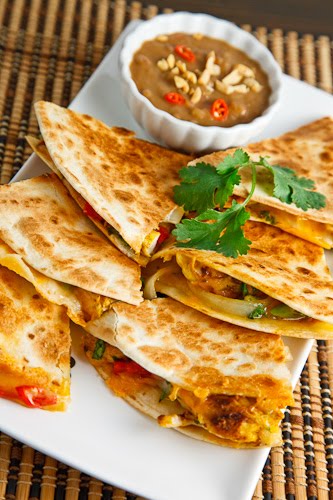 While I was enjoying my chicken satay with spicy peanut sauce my mind wandered to the fusion Korean/Mexican that I had been experimenting with recently and I wondered how a Thai/Mexican fusion would work. I had a bit of leftover satay along with some peanut dipping sauce and the first thing that popped into my head was quesadillas. I figured that the chicken satay and peanut sauce along with some cheese would form the base of the quesadilla but I wanted to fill it out a bit more and add some heat. Since one of the things that I like about Thai cuisine is all of the fresh ingredients I went in that direction and added some sauteed onions and red pepper along with some green onions and of course some cilantro. Adding the heat was the easy part with the addition of a chopped birds eye chili. I even had enough peanut sauce leftover to use for dipping. The chicken satay quesadillas with spicy peanut sauce turned out amazingly well! You really can’t go wrong with tasty chicken and sauteed onions and peppers in a quesadilla but I was particularly surprised by how well the flavourful peanut sauce and cheese combo worked in these quesadillas! I was more than satisfied by this experiment with Thai/Mexican fusion and I am now looking forward to more!