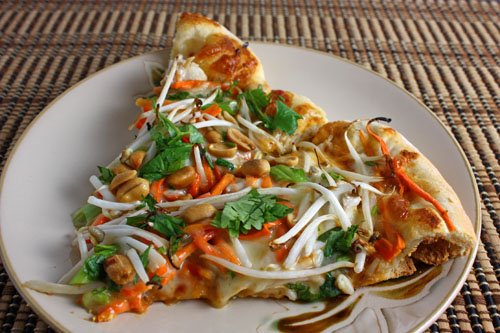 I had been thinking about using a spicy Thai peanut sauce as the sauce on a pizza for a while and the Daring Bakers pizza dough challenge was the perfect opportunity. I was thinking that shrimp or chicken would go well on the pizza and I wanted some vegetables. As I do fairly often when trying to work out new recipes I tried searching the web for similar recipes. I quickly came across several recipes for Thai style pizzas with peanut sauce and several of them finished the pizza off with julienned carrots and bean sprouts. I liked the sound of that pizza though I was a little worried that the bean sprouts would be charred to oblivion in the oven. I need not have worried as they were still in great shape when they came out. The pizza crust was nice and golden brown and the cheese was melted and bubbling and the vegetables were still slightly crisp. I really really liked this pizza!! The spicy peanut sauce worked well on a pizza with cheese and vegetables. It added a ton of flavour and a nice amount of heat to the pizza. All of the vegetables on top of the pizza were a refreshing change and of course a pizza like this would not be complete without some fresh chopped cilantro. 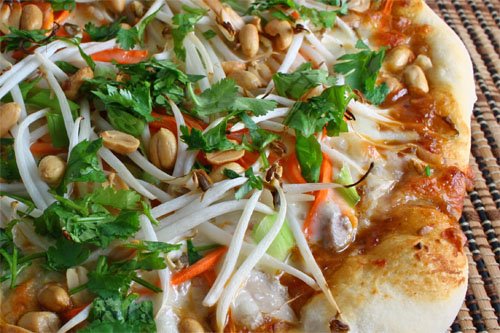