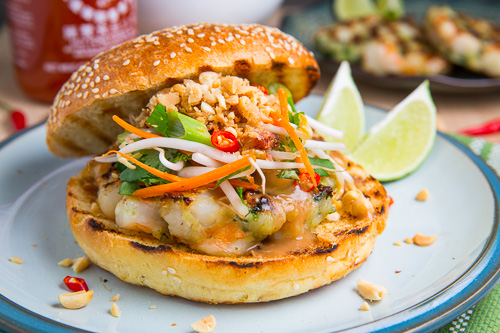 Succulent shrimp burgers with all of the flavours of pad Thai!

My next tasty new burger this grilling season is inspired by the flavours of shrimp pad Thai, aka shrimp pad Thai burgers. As many of you know, I am a huge fan of pad Thai and I always enjoy using pad Thsi flavours in different dishes and with burgers being on my mind a lot lately it struck me to combine the two. Pad Thai , a stir-fried noodle dish, can be made with any meat but my favourite has to be shrimp and a shrimp burger patty sounded like a fabulous idea. When I think of a shrimp burger I think of large chunks of juicy succulent shrimp bursting in your mouth with every bite and not some kind of texture-less shrimp patty so I decided to start with some fairly large shrimp and to cut them into a few big pieces. The only question was how to hold those large chunks of shrimp together and the obvious solution seemed to be to grind up a small portion of the shrimp in a food processor and to use shrimp to hold the shrimp chunks together. I do not really like to use ‘fillers’ like egg and breadcrumbs in burger patties so these shrimp burgers are simply large chunks of shrimp held together by some shrimp paste along with a few pad Thai flavours including garlic, shallots, fish sauce, lime zest and cilantro.
Up next was the condiments for the pad Thai burgers and I had to start with the sauce. Pad Thai is normally made with a tasty sauce consisting of sour tamarind, sweet sugar, salty fish sauce and spicy chilies so that is where I started but this sauce is a little too thick for what I wanted so I thinned it down a bit with the addition of some coconut milk. I could have stopped there with the sauce but I could not resist adding some peanut butter, which is not commonly used in pad Thai, but since pad Thai is often topped with chopped peanuts I figured adding some more peanut flavour could only make things better. I filled the pad Thai burgers out with some of the vegetables in pad Thai including bean sprouts and shredded carrots along with plenty of fresh cilantro and I finished them off with some chopped peanuts and crispy fried shallots.
I have to say that these tasty shrimp pad Thai burgers exceeded all of my expectations and that the pad Thai flavours work really well in burger form! I was also really pleased by how well the shrimp patties tuned out! The texture of the large chunks of shrimp was quite amazing and I am looking forward to making many more shrimp burgers in the future! 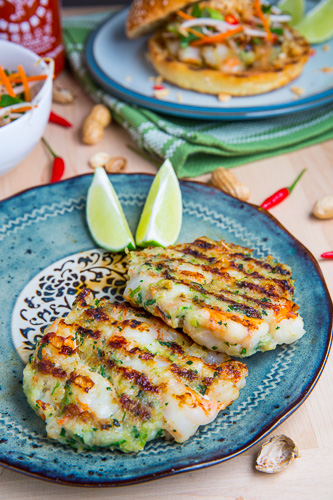 Just look at those large chunks of succulent shrimp! 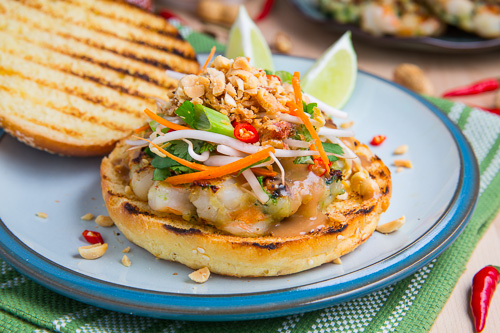 These pad Thai shrimp burgers are sure to impress at your next barbecue get together! 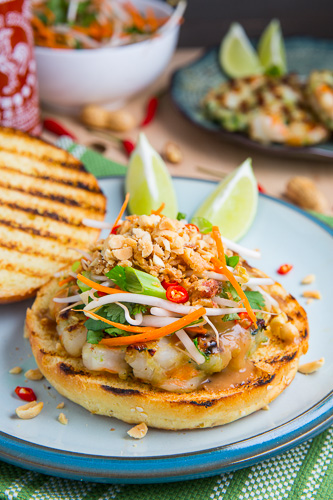 Succulent shrimp burgers with all of the flavours of pad Thai!