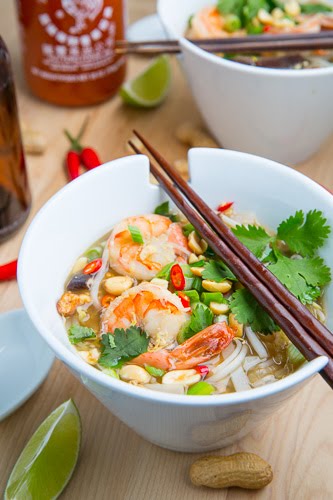 A tasty shrimp noodle soup inspired by the flavours of pad Thai.

I am a totally addicted to Pad Thai, a super tasty stir-fried noodle dish, so when I came across the idea of a pad Thai soup on Domestic Fits I just had to make my own! At its base pad Thai contains rice, noodles that are stir-fried with an egg, meat commonly shrimp and/or chicken and bean sprouts and it is garnished with cilantro, peanuts, green onions and lime juice. Pad Thai gets it flavour from a tasty sauce that is made with tamarind, fish sauce, sugar and chilies creating an amazing balance of sour, salty, sweet and spicy! With these things in mind I started the soup off with chicken broth that I simmered with the shrimps shells to impart their flavour to it. I then added all of the ingredients from the pad Thai sauce, the tamarind, fish sauce, sugar and chilies, to form a tasty broth for the soup. Next up I added some shiitake mushrooms which are also good in pad Thai along with the noodles and bean sprouts to fill out the soup. That left the egg which is great in fried rice or fried noodle dishes like pad Thai and since I love the texture that an egg adds to egg drop soup I decided to add the egg in that fashion. With the soup done, all that was left was to garnish it with cilantro, peanuts, chilies, lime juice and optionally some fried shallots and enjoy it! 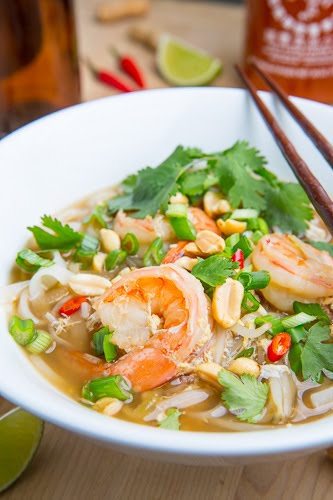 This is one really tasty soup and perfectly satisfying on a cold winter day like today! 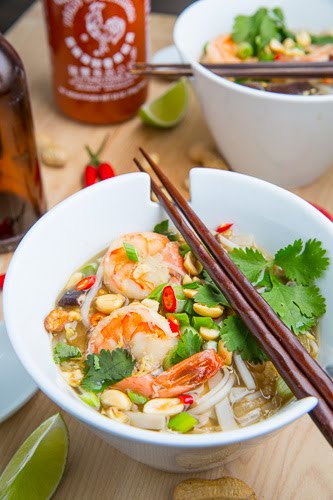 A tasty shrimp noodle soup inspired by the flavours of pad Thai.