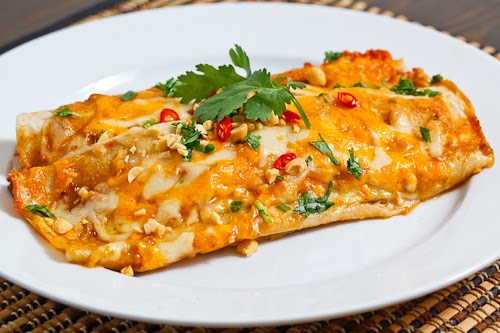 The Thai spicy peanut sauce worked really well in the Thai chicken ‘mole’ earlier in the week and why I was enjoying it I was thinking of other ways that could use the peanut sauce in a Thai/Mexican fusion. With the chicken being covered in the peanut sauce and melted cheese, the first thing that came to mind was enchiladas, the Mexican dish where tortillas are stuffed, covered in sauce and cheese and baked to perfection. I was thinking that a filling consisting of shredded chicken along with some vegetables including red pepper, bean sprouts, carrots and cilantro would be really nice especially when some of the spicy peanut sauce was mixed into it. With the filling made, all that was left to do was roll the tortillas up, cover them in peanut sauce and cheese and bake them until the cheese melted. The spicy peanut sauce and melted cheese flavor combination is such an amazing one and the juicy vegetable and chicken filling finished off the enchiladas perfectly! I garnished the enchiladas with some chopped roasted peanuts, cilantro and birds eye chilies.