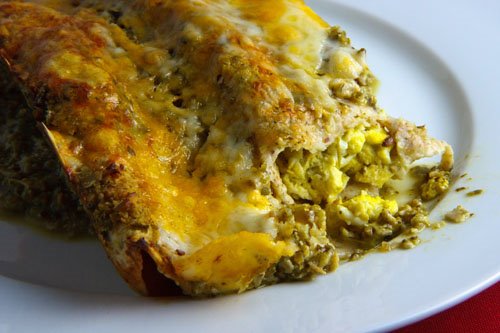 I had some pipian leftover from my turkey and pipian meal and I was wondering what I could use it for. The idea that most interested me was using the pipian to make some egg enchiladas for breakfast. It had been a while since I had last had enchiladas and I could just imagine them with a nice layer of golden brown melted cheese on top of the egg filled tortillas covered in moist pipian. I like h savoury foods for breakfast and the pipian egg enchiladas sounded like a great idea. I decided to keep it simple and I just scrambled the eggs (though you could easily use chopped hard boiled eggs) with some green onions for the filing. The enchiladas were pretty easy to make though they did need to bake for a while so they were not a quick breakfast, but perfect for a weekend. I still had a bit of pipian left and spread it out on the plates before serving the enchiladas on top. The egg enchiladas were nice and moist and the pipian worked well with the eggs and of course the cheesed helped as well. It was certainly a tasty breakfast!