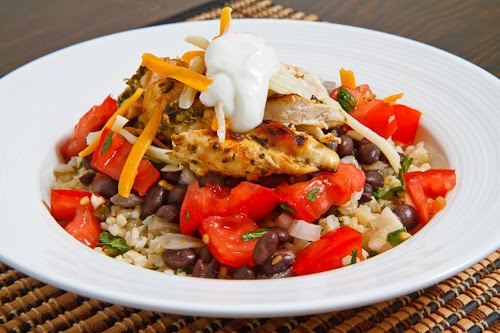 Burritos are one of my favorite Mexican dishes and they were on the top of my list of things to do with the tequila lime grilled chicken breasts but I was feeling a little lazy and decided to go with a deconstructed burrito or a burrito bowl instead. A burrito bowl is just what it sounds like; all of the contents of a burrito piled on top of each other in a bowl rather than wrapped up in a tortilla. Every once in a while I like to go with the burrito bowl rather than a burrito and when you make them by yourself you can control both the portion size and exactly what goes in it so you can keep it nice and light and healthy without compromising on flavour. For this burrito bowl I started with a base of cilantro lime rice made with a brown rice, some creamy and spicy seasoned black beans , a fresh pico de gallo and of course the tequila lime grilled chicken . I finished the burrito bowls off with a dollop of light sour cream and a touch of grated jack and cheddar cheese for that extra hit of flavour.