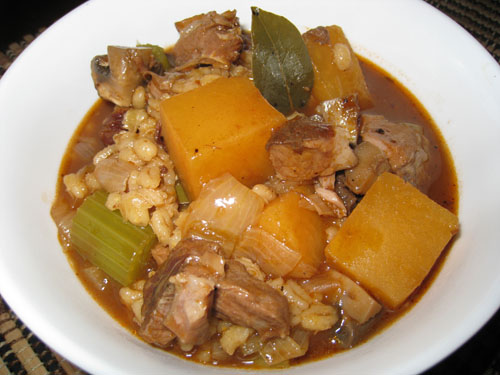 I was looking for tasty ways to use some of my leftover roasted beef and freshly made beef stock when I remembered barley. I had been wanting to try using barley for a while and I though that a beef and barley stew would hit the spot. I also liked this recipe because I would get the chance to use rutabaga which I had kept passing by in the grocery store. Since my beef had already been roasted I skipped the browning of the beef in the recipe below. The beef and barley stew turned out pretty good. It was nice and tasty. The beef was so moist and tender and fall apart in your mouth good. The barley had a really nice texture. It was chewy and had a bit of a bite to it, almost like al dente pasta. The rutabaga fit in nicely with the other root vegetables. I saw several recipes that called for frozen corn or frozen peas but I wanted to try sticking with the more seasonal root vegetables. I served the beef and barley stew with some grated white cheddar cheese for garnish.