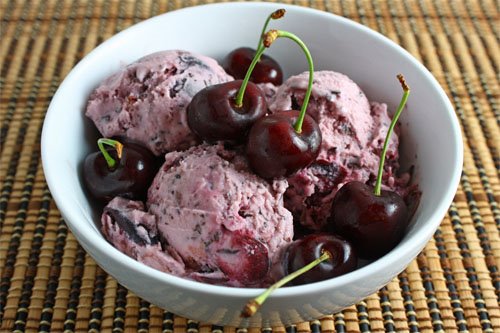 I have been enjoying cherries by the bowl full lately and while I was snacking on a bowl I was thinking about ice cream. I remembered seeing Mike’s cherry frozen yogurt with chocolate stracciatella at Mike’s Table and thinking that I just had to try it. I realized that I had not really done an ice cream with chocolate chips and now was the perfect time since cherries and chocolate go so well together. This recipe did not however call for chocolate chips but rather melted chocolate was poured into the ice cream when it was almost done and still in the maker which sounded like fun. I went with my standard ice cream base and I used halved cherries as I wanted some nice big chunks of cherries in the ice cream. The stracciatella ice cream was a bit more challenging to make than normal ice cream as you have to time the melting of the chocolate and pouring it into the ice cream when it is almost done but not quite. The cherry and chocolate stracciatella ice cream turned out really well. I though that I might have poured the chocolate in a bit too late but the chocolate had mostly formed nice little flakes. There were also a few big chunks which were always nice to run into. The cherry and chocolate flavoured creamy ice cream was really good!