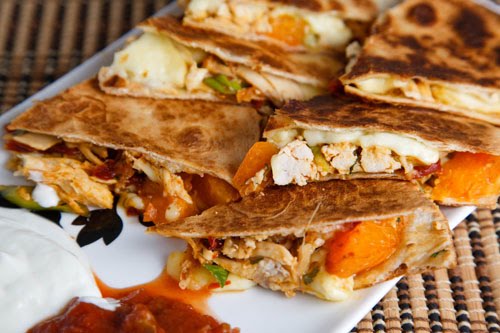 After a long break from Texmex/Mexican cuisine I was back into the zone and craving more. I also wanted to use some fresh local ingredients and I remembered seeing a chicken, apricot and brie panini on good Life {eats} which sounded like a good combo. I immediately thought about doing a quesadilla version but I knew that I would need some heat so I added some chopped chipotles in adobo sauce. I followed that with some cilantro, and green onions and I was just about done. For the apricots, I decided to grill them first and I thought that since brie goes well with jams that a bit of apricot preserves would both enhance the apricot flavour and add a nice touch of contrasting and balancing sweetness. I like to cook my quesadillas stove top in a pan as I am always able to get them nice and golden brown and slightly crispy on the outside and ooey gooey and melted and good on the inside and this time was no different. The chipotle chicken, apricot and brie quesadillas turned out really well! I liked the combination of the spicy chipotle chicken along with the apricots and the melted cheese all wrapped in crispy tortillas. The touch of sweetness from the apricot preserves worked just as well in these quesadillas as they do in grilled cheese sandwiches and I am going to enjoy experimenting some more with the new combo.

Tip: Place a plate onto the quesadilla and flipped it from the pan to the plate and then slide it back into the pan to flip the quesadilla.
Similar Recipes:
Turkey and Cranberry Quesadillas
Apricot Chicken Curry
Fig and Brie Panini with Prosciutto
Monte Cristo Quesadillas