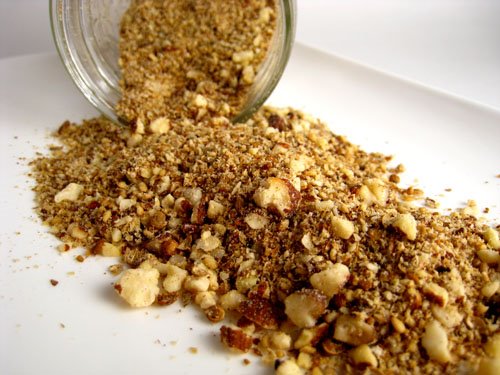 A while ago I was watching Ricardo and Friends on the Food Network and he made something called Dukkah which sounded pretty interesting. Dukkah is an Egyptian blend of nuts, seeds and fragrant spices. I searched the web and quickly found a bunch of recipes and each of them had a different combination of nuts, seeds and spices. I tried to distill all of the recipes down to the core ingredients of a basic dukkah and came up with this combination. Most of the dukkah recipes used either almonds or hazels nuts but I decided to use both. I wanted a chunkier texture so I just chopped the nuts by hand though you could place them into a food processor to make a finer dukkah. One recipe called for dried lemon zest which I will have to try next time.
Since dukkah is used to add flavour to dishes toasting the nuts, seeds and spices is an important step to bring out the full flavour of all of the ingredients. Since I was already toasting so many things I decided to toast up some chili peppers and made a fresh chili powder blend for the dukkah.
The dukkah turned out to be pretty aromatic and tasty. I first tried the dukkah by dipping bread in olive oil and then in the dukkah. Since then I have used the dukkah as a garnish on soups , salads and other vegetables (like roasted cauliflower). Dukkah sounds like it would make a great crunchy crust for fish, chicken, pork chops, etc. I keep finding myself thinking, “Can I put dukkah on this?”.

Note: Mix in the chili pepper a little at a time and test the heat with some bread and olive oil.
Use in:
Roasted Cauliflower and Red Pepper Soup
Dukkah Crusted Cod
Similar Recipes:
Chili Powder